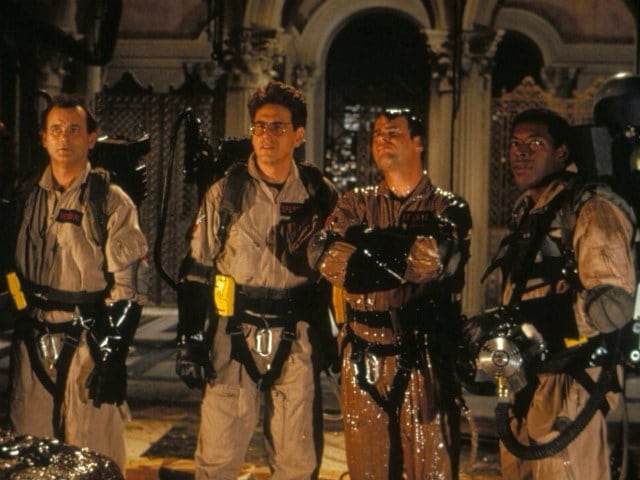 A still from Ghostbusters II.

Granted, Ghostbusters II didn't depict the world of 2016. It only suggested - in the service of a punch line - that it would end then. The character of Elaine was played by Chloe Webb, who doesn't know why screenwriters Harold Ramis and Dan Aykroyd picked February 14, 2016

In one of the opening scenes of Ghostbusters II, a washed-up Peter Venkman (Bill Murray) shoots an episode of his rinky-dink TV show World of the Psychic. One of the guests is a spooked woman named Elaine, who claims to have encountered an alien at the Holiday Inn in Paramus, New Jersey. The alien, after buying her a cocktail at the hotel bar, took her back to its room/spaceship and told her the world would end on February 14, 2016.
"Valentine's Day," Venkman says, looking into the camera. "Bummer."
This Valentine's Day, actually. At the time of the movie's release in 1989, the date was nearly 27 years away, but here we are now, on its cusp.
News alert: Futuristic dates have a way of catching up with us. They also unleash a wave of pop-culture nostalgia and armchair futurism. Recall the hubbub over October 21, 2015, the date to which Marty McFly travels in Back to the Future Part II (also released in '89). Cultural commentators itemized the ways in which the imagined world of 2015 compared to the actual world of 2015. (Yes, there are now "hoverboards"; no, they don't actually hover, etc.)
Granted, Ghostbusters II didn't depict the world of 2016. It only suggested - in the service of a punch line - that it would end then. The character of Elaine was played by Chloe Webb, who doesn't know why screenwriters Harold Ramis and Dan Aykroyd picked February 14, 2016. Her theory is that they used Valentine's Day as a romantic bookend to the movie's climax, wherein the Statue of Liberty vanquishes New York's slimy vibe to the strains of Jackie Wilson's "(Your Love Keeps Lifting Me) Higher and Higher."
Webb - best known for playing doomed punk-rock girlfriend Nancy Spungen in Sid and Nancy - recently re-watched Ghostbusters II as a favour to the team of filmmakers behind Ghostheads, an unfinished documentary about the franchise's superfans.
How does it hold up? It's still "pretty funky-fresh, actually," says Webb, on the phone from California while shooting an indie in the hills between Ventura and Santa Barbara.
"I was thinking Ghostbusters II is as fresh as Allen Ginsberg's Howl. We did a reading of it in L.A. in a big theatre full of hipsters, with David Lynch's meditation group, with a rock band behind us, and it got a standing ovation. It's just so true. 'The crazy shepherds of rebellion'! Ghostbusters II is like a comedy version of the same thing: a little band of people saying 'I know you think I'm crazy, but this is not right, this is not good.'"
There you have it: the Ghostbusters-Beat poetry comparison you didn't know you needed. Anyway: The makers of Ghostheads asked Webb to make a short video in character, as Elaine, to promote their Kickstarter campaign, which launches Thursday. Elaine is still in Paramus but has since revised her expectation of the apocalypse:
"As long as there's more love than slime, the world goes on."
Beautiful. As for the Paramus Holiday Inn, there is one, still. It's a Holiday Inn Express, actually, across from the Paramus IKEA, about a dozen miles outside Manhattan. There is a bar, but it's only open til 10:30 a.m., and it only serves breakfast. Happy Valentine's Day! (Also Read: Lady Gaga Engaged: 'He Gave me His Heart on Valentine's Day')
Watch Elaine from World of the Psychic (Ghostbusters 2) Valentine's Day prediction: