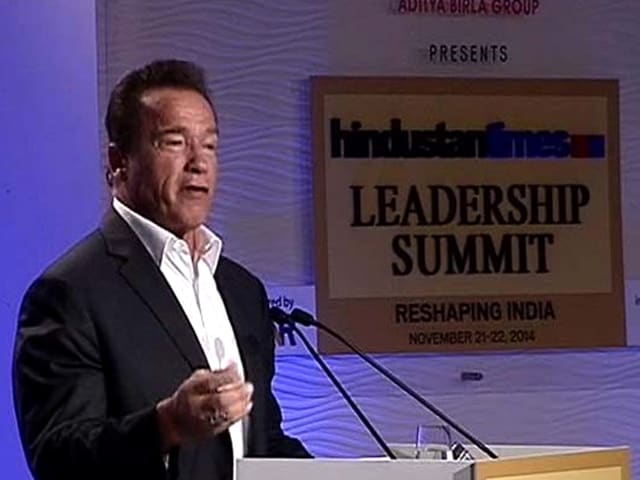 Arnold Schwarzenegger during a session at the Hindustan Times Leadership Summit.

Actor and politician Arnold Schwarzenegger, who was addressing a session at the Hindustan Times Leadership Summit in New Delhi on November 22, spoke about how his legendary 10-year long rivalry with colleague Sylvester Stallone transformed into friendship.

Mr Schwarzenegger said: "It was all out war. We hated each other, we wanted to outdo each in every way - ho has the most muscles, who has the least body fat, who kills more people on screen, who kills them in the more unique way, who makes more money in the box office. And then after 10 years,, in the Nineties, we became friends. Now we make films together."

Arnold Schwarzenegger and Sylvester Stallone are considered the finest of Hollywood's action stars, starring in films like The Terminator and the Rocky and Rambo series respectively. (Also Read: Bizarre Feeling to Watch The Terminator Walk Into My Room: Aamir Khan)?

Mr Schwarzenegger also spoke at length about how difficult it was for him to become an actor when he first arrived in America decades ago, an Austrian bodybuilder with an accent that made him "talk like a machine." He was told that he could never be a leading man. "Al Pacino and Woody Allen were the sex symbols. People wanted to hear John Wayne speak," he said.

As The Terminator, he famously said on screen, "I'll be back." In real life, he came back with a vengeance and continued to. "Eventually, I got back again and I thought I'm in America to beat all the body-builders. I moved to California - trained with American body builders and beat them at their own game," Arnold Schwarzenegger said. "I've had many failures. What makes you a winner is when you fail but you get up again and dust yourself off," he added.

Mr Schwarzenegger, who served two terms as Governor of California, said that "it was very hard work but a joy to serve."

"Don't be afraid to fail. Don't take the short cut. Don't listen to naysayers," was the actor-politician's advice. To young people leaving college, he said: "have a vision, don't listen to your parents, culture, mentors; enjoy your career."

There was only one way the session could have ended. "I've come to India so many times for so many reasons. I love coming to India. I'LL BE BACK," said The Terminator to thunderous applause.