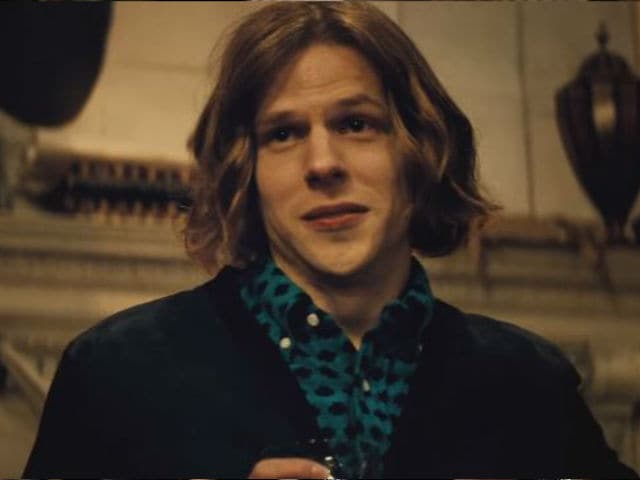 Jesse Eisenberg as Lex Luthor in a still from Batman v Superman.

DC's latest film, Batman v Superman: Dawn of Justice, has a Marvel problem.
The biggest issue with the Marvel Cinematic Universe - or, at least the complaint I hear most commonly that I also happen to share - is that the stakes in these movies feel relatively low. This despite the fact that the world (or, a world, anyway) is often on the brink of annihilation.
From Ronan the Destroyer (Lee Pace) in Guardians of the Galaxy to Malekith the Accursed (Christopher Eccleston) Thor: The Dark World to the Chitauri attack in Avengers to the legion of Ultrons in Avengers: Age of Ultron, our heroes are often faced with a horde of computer-generated horrors intent on either destroying or dominating the world for no particularly compelling reason. Ironically, escalating the stakes in a such a manner often renders them unimpressive.
With the exception of Green Lantern -- a horrifyingly bad film that featured as its villain an amorphous yellow blob that is, you guessed it, trying to wipe out humanity or something - DC films have done an exceptionally good job of creating villains with sensible stakes.
Christopher Nolan's Batman films, for instance, featured bad guys who had not only a personal connection to the series hero but also a coherent ideology informing their actions. Ra's al Ghul (Liam Neeson) both trained Batman (Christian Bale) and also plotted Gotham's destruction in order to "restore the balance" after it reached "the pinnacle of its decadence." Similarly, Bane (Tom Hardy) hoped to use a combination of populist terror and economic warfare to succeed where Ra's al Ghul failed - and gain a measure of revenge for Batman's killing of Ra's al Ghul. While Heath Ledger's Joker was an agent of chaos, he was, at least, honest about it: there was no doubting his commitment to craziness, his desire to upset the established order. (Movie Review: Batman v Superman)
Similarly, Zack Snyder's Man of Steel does not get enough credit for creating a villain who is not evil simply for the sake of being evil. Say what you will about the final hour of the film - Kryptonian General Zod (Michael Shannon) and Kryptonian American Superman (Henry Cavill) trade blows in Smallville before destroying the parts of Metropolis that weren't crushed by the atmosphere-altering World Engine - but Zod's motivation made sense.
He wasn't engaged in random destruction or world conquest; rather, he was fulfilling his purpose, satisfying his genetic code. He was literally born to defend Krypton and its people. If creating a new homeworld for the survivors of Krypton's destruction meant the deaths of billions of Earthlings, well, so be it. Zod wasn't a tragic figure, exactly, nor was he a particularly sympathetic one. But he's one you could empathize with: He simply wanted to help his people.
For a moment, it looked as though director Zack Snyder and writers David S Goyer and Chris Terrio were going to try something similar with Lex Luthor (Jesse Eisenberg) in Batman v Superman: Dawn of Justice. As the film opens, Lex, whose home city had been destroyed 18 months prior by a pair of Kryptonians, is looking for a "silver bullet" to take Superman out. Not because he's jealous of Superman or wants to rule the world - simply because men cannot afford to stand idly by while a god-like being has the power to kill all of them by doing little more than opening his eyes. This is a thematically, logically and ideologically compelling way to portray Lex. (Also Read: How Ben Affleck Revamped His Superhero Role For Batman v Superman)
It's too bad that Snyder and company don't stick with it: As the film progresses, Lex degenerates into a gibbering mad man, some strange mix of the Riddler and the Joker with a little bit of Mark Zuckerberg added for flair. He hates Superman because God didn't protect him from an abusive father, or some such, and that hatred twists him into something maniacal. This leads to all sorts of unexplainable lunacy - the bombing of the Capitol building and the creation of a super-powered monster named Doomsday, among them -- that culminates in a massive CGI battle calling to mind the end of The Incredible Hulk. Awkwardly, every time Lex does something to try and up the stakes, he ratchets down the tension rather than ramping it up.
Simply put: We don't care about Lex's plan because Lex's plan doesn't make any sense. In the end, he's just ... kinda evil, and for no good reason. There's very little to empathize with, very little common ground. In its urge to emulate the Marvel Cinematic Universe, I fear that DC has fallen into the Marvel villain trap.