Priyanka Chopra appeared for less than a second in Baywatch trailer 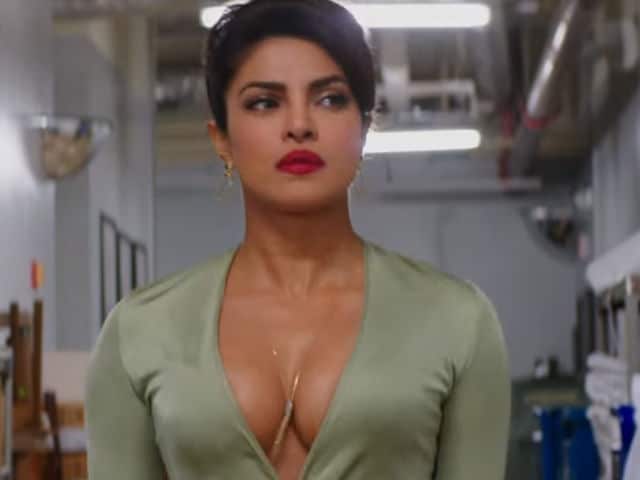 Priyanka Chopra is a villain in Baytwach

Dear Priyanka Chopra fans, if you were disappointed by her blink-and-miss appearance in the trailer of her upcoming film Baywatch, then don't be. Her mother Madhu Chopra assures that Priyanka's negligible appearance in the trailer which released earlier in December is a "publicity strategy" and the makers "don't want to give out the best part of the film," reported news agency IANS. "That is their strategy. They don't want to give out the best part of the film and Priyanka, 34, is the best part of the film. It's a publicity plan that they had for the trailer. Priyanka is the main antagonist and she has a fabulous role in it," she told IANS. Baywatch releases in May.
Priyanka Chopra plays the main antagonist in the Seth Gordon directed film, inspired by the Nineties sitcom Baywatch starring David Hasselhoff and Pamela Anderson. Priyanka plays Victoria Leeds and from her multiple interviews we know that Victoria is a super sassy "bombshell of a villain" who wants to ruin the peaceful run (slow-mo or otherwise) of the lifeguard group on the beach. The group led by Dwyane Johnson (who took David Hasselhoff's Mitch Buchannon role) also includes Zac Efron, Alexandra Daddario, Kelly Rohrbach (playing Pamela Anderson's CJ Parker) and Ilfenesh Hadera.
Watch the trailer of Baywatch

Priyanka currently counted among the top television actresses, courtesy her American television show Quantico, is in India for Christmas break. Priyanka, who spent a good part of 2016 in New York, is here for a few days and the actress said that she'll soon sign up for two Bollywood films to be made next year. Priyanka will also finalise the next script she'll produce under the Purple Pebble Pictures banner.
Meanwhile, Priyanka's mother says she is not bothered about the negative comments aimed at Priyanka. She told IANS: "There was a time when negative news used to bother me, but now it doesn't because I know my daughter better than anyone else. If somebody writes negative, I know it cannot be true because she is very genuine, very honest and very true to herself. I am not saying she can't do anything wrong, but she can't do anything bad. I can guarantee that."
Priyanka last few Bollywood films were Dil Dhadakne Do, Bajirao Mastani and Jai Gangaajal. She will resume the shoot of Quantico once she's back in NYC.
(With IANS inputs)