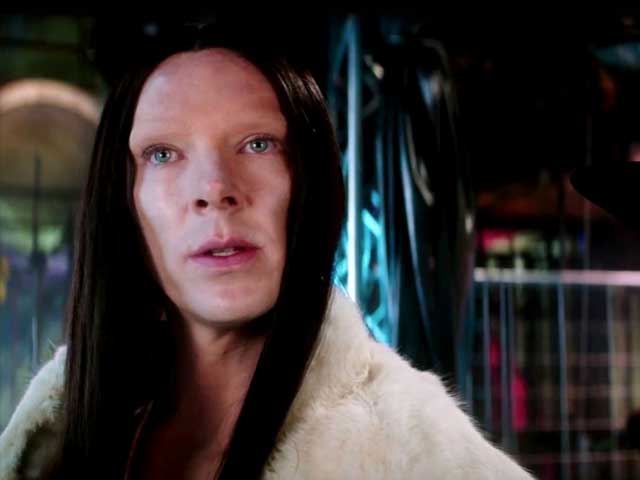 Benedict Cumberbatch in a still from Zoolander 2

"Are you, like, a male model or a female model?" the clueless Zoolander, played by Ben Stiller, asks Benedict Cumberbatch's character, a model named "All." While this may have been humorous when the original Zoolander was released 14 years ago, it wasn't a joke for the age of Caitlyn Jenner

The world of Zoolander - which features the madcap adventures of less-than-ingenious male models played by Ben Stiller and Owen Wilson - doesn't seem suited to a gender politics dust-up. Yet that is what a new sequel to the 2001 film is faced with after a preview included a scene with an androgynous model played by Benedict Cumberbatch.
"Are you, like, a male model or a female model?" the clueless Zoolander, played by Stiller, asks Cumberbatch's character, a model named "All."
"All is All," Cumberbatch replies.
"I think he's asking - do you have a hot dog or a bun?" says Hansel, played by Wilson.
While this may have been humorous when the original Zoolander was released 14 years ago, it wasn't a joke for the age of Caitlyn Jenner.
"Cumberbatch's character is clearly portrayed as an over-the-top, cartoonish mockery of androgyne/trans/non-binary individuals," an online petition calling for a boycott of the film reads. "This is the modern equivalent of using blackface to represent a minority."
The petition, which as of early Wednesday morning had garnered more than 21,000 of the 25,000 signatures it sought, pointed out that there is no shortage of "trans/androgyne individuals in the fashion industry" who could have provided "social commentary" in the film. One example: Andreja Pejic, who came out as trans last year.
"Now I can stand naked in front of a mirror and really enjoy my reflection," Pejic said after her sex-reassignment surgery last year. "And those personal moments are important."
Yet, Zoolander 2 appeared to dismiss such personal struggles as mere fodder for laughs.
"By hiring a cis actor to play a non-binary individual in a clearly negative way, the film endorses harmful and dangerous perceptions of the queer community at large," the petition concluded. ("Cisgender," or "cis," is a term for a person who is not transgender.)
One of the film's writers was quick to take offense at the taking of offense.
"I don't even know what to make of it, because it hurts my feelings in a way," co-writer Justin Theroux, who penned the script with Stiller, told the Wrap. "I take great care in the jokes I write, and the umbrage being taken is out of the context of the scene. I wish people would see the movie first. Satire is a thing that points out the idiots, and we went through it on Tropic Thunder with the 'R' word."
Indeed, that 2008 film - another Theroux/Stiller collaboration - included repeated use of the word "retard" that proved controversial, though not enough to prevent the film from grossing more than $110 million and scoring a Best Supporting Actor Oscar nomination for Robert Downey Jr (who, not incidentally, wore blackface in the movie).
"At the end of the day people are looking for bandwidth," Theroux also said. "People are looking for places to inject their voice. But our target is not, and never was, to disenfranchise anyone."
Yet, one critic thought that crying "satire" wasn't enough.
"If the team were really so invested in making any sort of point about transphobia (even one so banal as 'don't do it, kids'), they would have felt confident in hiring a transgender actor or model for the role - Andreja Pejic, perhaps - and writing for Cumberbatch an alternative part," Lexi CMK Turner wrote at the Independent. (Turner also pointed out the petition's comparison of Cumberbatch's performance to blackface wasn't really legitimate: "To have a modern equivalent of anything requires the original comparative to be no longer relevant, and sadly that's not the case.")
Cumberbatch - Sherlock Holmes on TV, Hamlet onstage, and Oscar-nominated for his turn as persecuted gay mathematician Alan Turing last year in The Imitation Game - is a big target. Not only does he have a devoted following of self-proclaimed "Cumberbitches," but the actor is well-known for his liberal politics and feminism.
In service of the latter, Cumberbatch went so far as to question how his fans refer to themselves.
"I'm very flattered, but has this not set feminism back a little bit?" he said earlier this year. "Empower yourselves if you're going to get silly about a guy with maybe a little bit more of a sort of, you know, a high-regard, self-regarding name!"
Yet, Cumberbatch is not infallible. He had to apologize earlier this year after using the politically incorrect term "coloured" in an otherwise politically correct conversation about a lack of opportunity for minority actors in the United Kingdom.
"I'm devastated to have caused offense by using this outmoded terminology," Cumberbatch said at the time. "I offer my sincere apologies. I make no excuse for my being an idiot and know the damage is done."