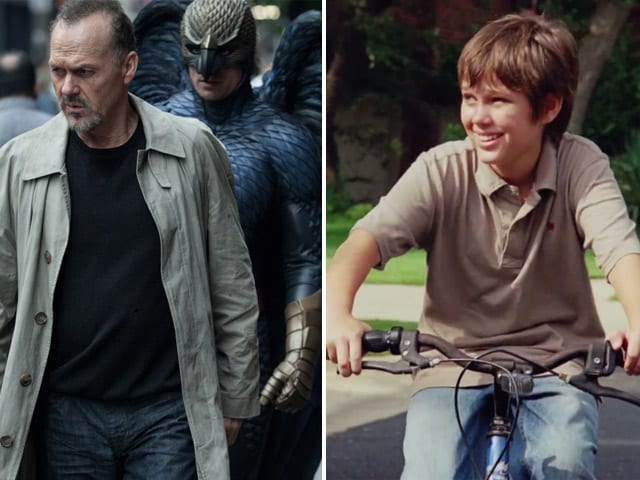 A still from Birdman (left) and Boyhood

The 21st annual Screen Actors Guild Awards should offer a low-key preview to the Academy Awards and a chance for favorites to begin polishing up their acceptance speeches.

Vying for the evening's top honor, best ensemble, are - Birdman, Boyhood, The Grand Budapest Hotel, The Imitation Game and The Theory of Everything.

Because actors make up the largest portion of the Academy of Motion Pictures Arts and Sciences, the SAG Awards are considered one of the most telling Oscar previews. Individually acting winners usually mirror each other exactly, or very nearly. Last year, the top four winners - Matthew McConaughey, Cate Blanchett, Lupita Nyong'o, Jared Leto - all went on to win Academy Awards after first scooping up SAG Awards.

This year, there appears to be three fairly certain locks: Julianne Moore (Still Alice), Patricia Arquette (Boyhood) and JK Simmons (Whiplash). Best actor is harder to call, with Michael Keaton (Birdman) seen as the front-runner and Eddie Redmayne (The Theory of Everything) close behind.

The predictive powers of the SAGs have been more checkered in matching its top award with eventual best-picture Oscar winners. In the last six years, SAG best-ensemble and Academy Award best-picture winners have lined up three times (Argo, The King's Speech and Slumdog Millionaire), while diverging just as often. Last year, the actors chose American Hustle over eventual Oscar winner 12 Years a Slave; in 2011, they picked The Help over The Artist; and in 2009, Inglourious Basterds defeated The Hurt Locker.

Though movie categories will dominate the evening, the SAGs also honor television.

This year's lifetime achievement award will go to Debbie Reynolds, the 82-year-old veteran of stage and screen and, of course, Singin' in the Rain.