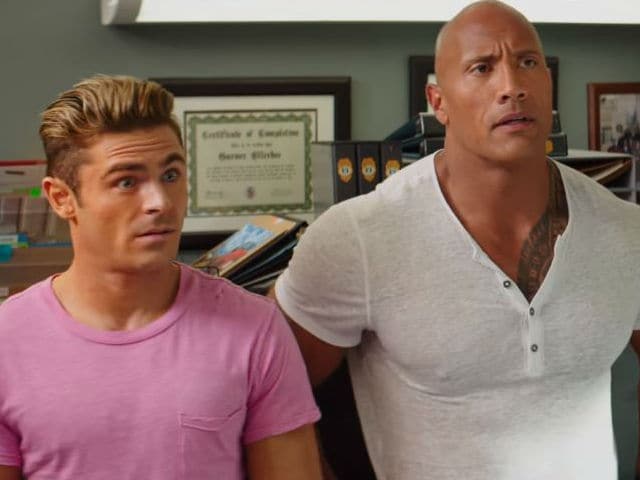 "All good thing come to those who wait and in this case it's all bad," tweeted Priyanka Chopra along with the teaser of her Hollywood film Baywatch. After checking out its first trailer I have to agree IT IS bad, just not in the coy way Priyanka means it. Baywatch the movie has 'jokes' that are offensive at worst and juvenile at best

"All good thing come to those who wait and in this case it's all bad," tweeted Priyanka Chopra on Thursday, making a tongue-in-cheek reference to her character Victoria Leeds in Baywatch, the movie version of the Nineties beach-side show. After checking out the first trailer of Baywatch that released on Thursday night I have to agree IT IS bad, just not in the coy way Priyanka means it. It's not Priyanka's blink-and-you-miss-it appearance in the trailer that I take issue with but rather why she chose not to just miss this entirely. Baywatch, which is the 34-year-old actress' Hollywood debut, stars Dwayne 'The Rock' Johnson, Zac Efron and Alexandra Daddario as the lifeguard squad. Priyanka's character is the antagonist.
Baywatch the serial was everyone 's favourite running joke, perhaps in more ways than one, but Baywatch the movie has 'jokes' - and I use the term in its loosest sense - that are offensive at worst and juvenile at best. No wonder the cast seemingly needs to come up for breath (pardon the pun) after each ridiculous exchange. Particularly Dwayne Johnson (who plays Mitch Buchannon, the role made famous by David Hasselhoff) and he's one of the producers! Though even he appeared to have had second thoughts about Zac Efron's falsetto act involving his. Well, I wish I could say beach balls. Zac plays Matt Brody, a role originally taken by actor David Charvet on TV.
The cast, for the most part, looks like they've been cut out of cardboard and spray tanned to within an inch of their lives. Zac Efron has clearly worked on his abs, but not much else. The props are all in place - the iconic red swimsuits, the slo-mo runs, the perfectly sculpted physiques. But I can't help but feel nostalgic for Hoff and the gang. Comparisons may be unfair but considering Dwayne Johnson plays Mitch, Zac Efron plays Matt (where is David Charvet, by the way) and Kelly Rohrbach plays Pamela Anderson's character CJ Parker, the comparisons are inevitable. Perhaps it was simply a different time but Baywatch the serial had a charm that worked - and maybe this is just me, IN SPITE OF and not because of the so called obvious. There was a certain sun-kissed freshness to the TV cast. Rather like a gang of earnest Boy Scouts and Girl Guides who just happened to look great in beach wear.
So I was, we were all, really rooting for Baywatch to be Priyanka Chopra's big break into Hollywood. The nano-bit of the trailer in which she appears shows Priyanka striding down a hallway with a glass of champagne. It screams "I'm the villain of the piece" - reminding us of almost caricature-like TV soap characters such as Alexis Carrington from Dynasty.
Let's face it, Quantico isn't exactly the most scintillating stuff either but apart from the first two episodes, when we were getting accustomed to Priyanka's new accent, it has never been cringe-worthy. PC made us proud! I'm guessing that with Baywatch, that's going to be an uphill struggle.
Priyanka Chopra may still end up being the surprise package of the film. 'Wait for Victoria' is certainly going to be a popular refrain, but let's hope PC has a plan B in place to make waves in Hollywood. Because from the trailer, at least, this seems C grade and from Priyanka, we've becomes accustomed to only A plus these days. For Baywatch fans, though, here's hoping that David Hasselhoff and Pamela Anderson, who will make cameos in the film, end up saving the day - as they used to on TV.
(Beverly Kim White is Associate Editor, Entertainment for NDTV 24x7)
Disclaimer: The opinions expressed within this article are the personal opinions of the author. The facts and opinions appearing in the article do not reflect the views of NDTV and NDTV does not assume any responsibility or liability for the same.