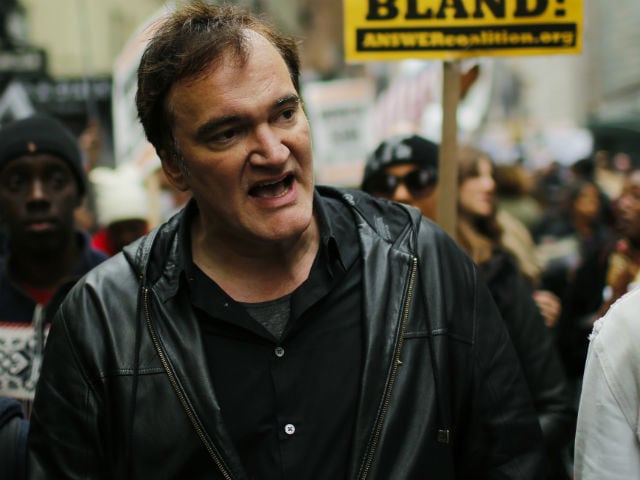 "There is no place for inflammatory rhetoric that makes police officers even bigger targets than we already are. Film director Quentin Tarantino took irresponsibility to a new and completely unacceptable level this past weekend by referring to police as murderers during an anti-police march in New York"

The police unions of New York and Los Angeles have banded together against filmmaker Quentin Tarantino, demanding a boycott of his movies after the Oscar-winning director described some police officers as "murderers" at a rally against police brutality in New York City over the weekend, reports Los Angeles Times.
Los Angeles Police Protective League President Craig Lally said: "There is no place for inflammatory rhetoric that makes police officers even bigger targets than we already are. Film director Quentin Tarantino took irresponsibility to a new and completely unacceptable level this past weekend by referring to police as murderers during an anti-police march in New York."
New York's largest police union was the first to call for a boycott of Mr Tarantino films after he protested against the deaths of unarmed suspects at police hands during a rally in on October 24. "It's no surprise that someone who makes a living glorifying crime and violence is a cop-hater, too," Patrick Lynch, president of the Patrolmen's Benevolent Association, told news agency AFP.
"It's time for a boycott of Quentin Tarantino's films," he said. Mr Tarantino's latest movie The Hateful Eight -- about bounty hunters in Wyoming after the American Civil War - will premiere in the United States on Christmas Day.
It follows a string of box office hits, including Reservoir Dogs and Pulp Fiction, that have earned the director two Oscars and scores of other awards around the world.
"The police officers that Quentin Tarantino calls 'murderers' aren't living in one of his depraved big screen fantasies - they're risking and sometimes sacrificing their lives to protect communities from real crime and mayhem," said Mr Lynch.
"New Yorkers need to send a message to this purveyor of degeneracy that he has no business coming to our city to peddle his slanderous 'Cop Fiction'," he added.
The 52-year-old director joined hundreds of people marching in New York last weekend, campaigning against perceived police brutality and the deaths of unarmed suspects in custody.
For more than a year, high-profile deaths of black men have galvanized nationwide demonstrations in USA by protesters complaining that police unfairly profile black and Latino men. They also criticize what they see as the militarization of law enforcement in the country.
"This is not being dealt with in any way at all. That's why we are out here," Mr Tarantino told AFP and another reporter. "If it was being dealt with, then these murdering cops would be in jail or at least be facing charges," he added.
A database compiled by the Guardian newspaper says more than 930 people have been killed by police in the US so far this year, of whom 436 were white, 226 black and 143 Latino.
The National Law Enforcement Officers Memorial Fund estimates that one law enforcement officer is killed in the line of duty somewhere in the United States on average every 60 hours.