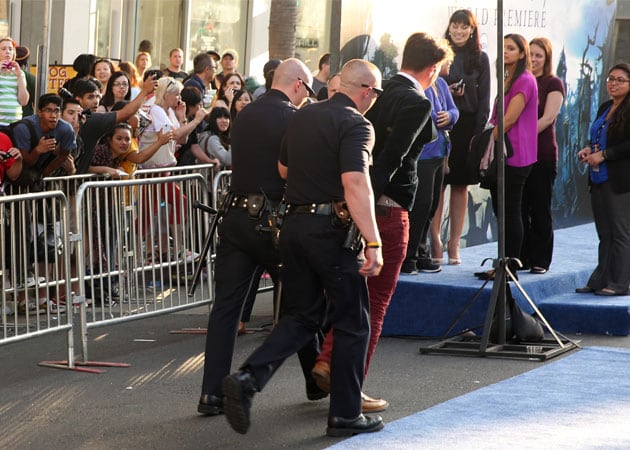 A man who was arrested after police said he rushed and touched Brad Pitt at the premiere of the Angelina Jolie movie Maleficent is a former Ukrainian journalist with a history of getting too close to celebrities.

A man who was arrested after police said he rushed and touched Brad Pitt at the premiere of the Angelina Jolie movie Maleficent is a former Ukrainian journalist with a history of getting too close to celebrities. (Also read: At Maleficent Premiere, Brad Pitt Punched by Serial Prankster)
Vitalii Sediuk was jailed on Wednesday on suspicion of misdemeanor battery at the El Capitan Theatre in Hollywood and was held in lieu of $20,000 bail, police said.
Sediuk has previously crossed the line with celebrities, most recently rushing America Ferrara on a red carpet at the Cannes Film Festival and crawling under her dress.
He crashed the 2013 Grammy Awards and was arrested after he went onstage and grabbed a microphone before Adele accepted an award. He pleaded no contest to trespassing and remains on probation.
In 2012, Will Smith slapped Sediuk after he tried to kiss him on a red carpet, and he drew Madonna's ire a year earlier by presenting her a bouquet of flowers.
In the latest incident, Sediuk is accused of jumping over a barrier in a fan area and rushing at Pitt along the red carpet, touching him briefly before security guards wrestled Sediuk away in handcuffs.
Police could only confirm that he made contact with Pitt and could not classify it further. Pitt was apparently unhurt and resumed signing autographs before walking into the theater.
Sediuk worked for Ukrainian television channel 11 before he was recently fired, station general director Oleksandr Tkachenko said. No further details were provided.
Angelina Jolie stars in Maleficent, Disney's new live-action spin on its animated classic Sleeping Beauty.
Attorney Anthony Willoughby, who represented Sediuk in the Grammy trespassing case, said he will likely represent the former journalist if any new charges are filed.
The latest incident might constitute a violation of Sediuk's probation, the lawyer said. "He's not a violent individual," Willoughby said. "He's an easygoing young man."
Christa Scherck, a publicist who worked with Sediuk for the past two years, said she was severing ties with him after his arrest. She said she was never aware of his prank plans.
"This goes beyond pranking," she said. "This is no longer entertaining."
Before the incident, Angelina Jolie said the El Capitan was like a local theater for her, Pitt and their kids, who usually didn't attend premieres but were present on Wednesday night.
Sediuk got to Pitt despite security that was heavy for a movie premiere, with guards keeping a large gap between the stars and the crowd.
Email messages left for representatives of Pitt and Disney were not immediately returned.