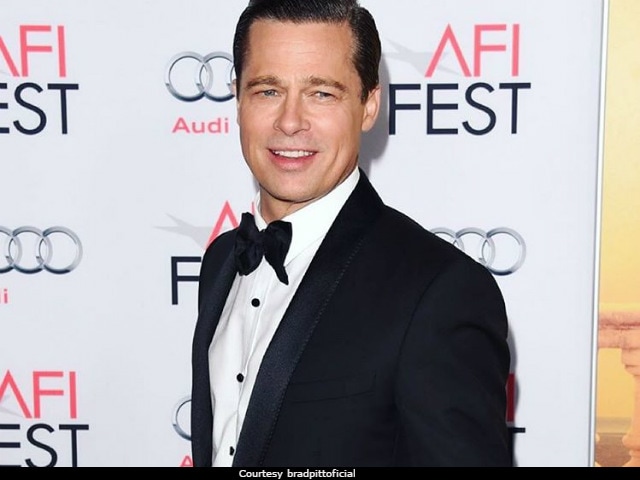 Brad Pitt said he realizes now he was trying to escape from his feelings. By the time he started a family, he was done with marijuana and was just using alcohol as his numbing agent of choice. But it came to a point where things got out of control

For the first time since news of his split with Angelina Jolie last September, Brad Pitt is back on the interview circuit. The occasion is his new Netflix movie, War Machine, which comes out May 26.
As a working actor, he couldn't hide from reporters forever, though he didn't have to be quite so forthcoming as he was in a sit-down with GQ. The takeaway: He seems depressed -- understandably. After all, he's holed up in his longtime Hollywood home while his six kids are living with their mom. But he also sounds introspective, if occasionally self-flagellating.
Here are some of the revelations from the interview:
- He says he's done with drinking
"I can't remember a day since I got out of college when I wasn't boozing or had a spliff, or something. Something."
Pitt said he realizes now he was trying to escape from his feelings. By the time he started a family, he was done with marijuana and was just using alcohol as his numbing agent of choice. But it came to a point where things got out of control. (There were rumors that the altercation on an airplane, which sparked the separation, was the result of Pitt's drunkenness.) So he quit.
"And I'm really happy, it's been half a year now, which is bittersweet, but I've got my feelings in my fingertips again."
It isn't always easy, however, especially since he owns a winery.
- He isn't going to drag his family through a big custody battle
Pitt heard one lawyer say, "No one wins in court - it's just a matter of who gets hurt worse." Luckily for him, he and Jolie agreed to work things out privately and says they're both doing their best. He thinks that court battles inevitably turn into long-term nightmares that typically result in "vitriolic hatred." "Fortunately my partner in this agrees," he said.
- He's having an existential crisis
Pitt has a lot to sort out, apparently. Not only has he come to terms with the fact that he's been using substances to escape his emotions, but he seems somewhat disgusted with himself, even calling himself an "a----" at one point.
He delved a bit into his tendency to ruin a good thing (and his failed marriage to Jennifer Aniston will inevitably come to mind for some readers): "I tend to run things into the ground," he said. "That's why I've got to make something so calamitous. I've got to run it off a cliff."
These days, he's sculpting, seeing a therapist and taking a good look at his shortcomings.
"For me this period has really been about looking at my weaknesses and failures and owning my side of the street," he said, before getting into his bizarre tendency to assume the cards are perpetually stacked against him.
"And this is coming from a guy who hit the lottery, I'm well aware of that," he said. "I hit the lottery, and I still would waste my time on those hollow pursuits."
- He's listening to a lot of Frank Ocean
He said for the first time he's understanding R&B, seeing it as a celebration that comes from pain. He has Ocean on repeat, but he's also been playing Marvin Gaye's Here, My Dear.
He also kept coming back to a story about an African mother he met once. She had lost nine of her family members but had the biggest laugh he'd ever heard. That's probably instructive for an A-list actor who just realized he has a victim mentality...
- His constant companion is a bulldog named Jacques
He doesn't do much except lie around but he's very loyal.
- He's gotten really into matcha green tea
Pitt may have given up alcohol, but he's found a new beverage of choice and he's taking it very seriously. Some people might just throw all the ingredients for their matcha tea into a blender, but not this guy.
"He deliberately sprinkles some green powder in a cup with a sifter, then pours in the boiling water, whisking with a bamboo brush, until the liquid is a harlequin froth," according to GQ's Michael Paterniti. It seems to be just one of the many ways Pitt is deliberately trying to keep himself occupied.
"If I'm not creating something, doing something, putting it out there, then I'll just be creating scenarios of fiery demise in my mind," he said at one point. "You know, a horrible end."
(c) 2017, The Washington Post
(This story has not been edited by NDTV staff and is auto-generated from a syndicated feed.)