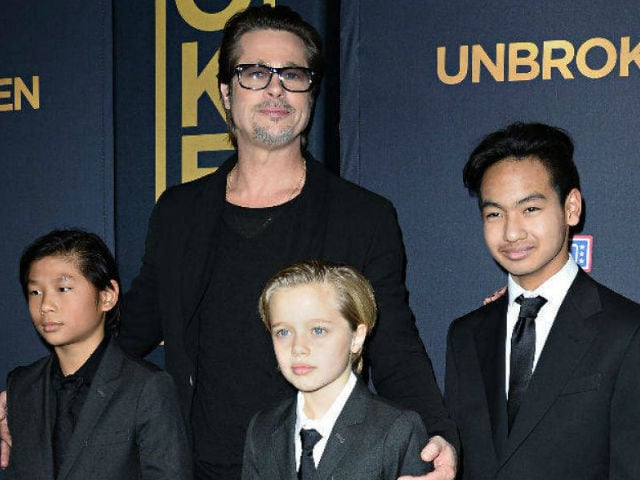 Angelina Jolie's allowed Brad Pitt to give gifts to their children

Hollywood star Brad Pitt has been allowed four-hour visit to his children on the Christmas Day by a court, a source close to the actor told Daily Star. Actress Angelina Jolie, his estranged wife, has reportedly agreed that Brad he can deliver gifts in the morning and early afternoon. Angelina filed for divorce from Brad Pitt in September and they are currently in the middle of a custody battle of their six children. Soon after filing for divorce, Angelina moved out of Brad's home and a rented beachfront mansion in Malib, where she live with Maddox, 15, Pax, 13, Zahara, 11, Shiloh, 10, and eight-year-old twins Knox and Vivienne.
"She doesn't have the heart to refuse to let him see the children over the holidays and they would probably never forgive her if she did. But Brad is going to have to use every ounce of his acting skill when he arrives with their presents and put on a brave face to mask the torment he's going through over spending so little time with them," said a source close to the former couple told Daily Star.
Angeline filed for divorce on the grounds of "irreconcilable differences" and is demanding sole physical custody of the kids with visitation rights only for Brad, whose lawyers have filed a counter-claim. As part of the Family Services probe, Brad was ordered to undergo anger management counselling and submit drug tests prior to agreed visits with the children.
"He bit his tongue and suffered through all of that in the hope Angelina would allow him more time with their kids. But he was really choked when he didn't get to spend a single moment with them at Thanksgiving last month. And although he can't wait to see them at Christmas, he's dreading how hard it will be for him to leave them again after four hours," the source told Daily Star.
Angelina Jolie and Brad Pitt met on the sets of 2005 film Mr And Mrs Smith, when Brad was married to actress Jennifer Aniston. Brad and Angelina got married in 2014 after living together for almost a decade. They last co-starred in By the Sea, which was also directed by Angelina.
(With IANS inputs)