Make no mistake, he looks great. In fact, several tweets expound on just how good Brad Pitt looks as a 53-year-old former boozer. But most comments on the photoshoot are mocking 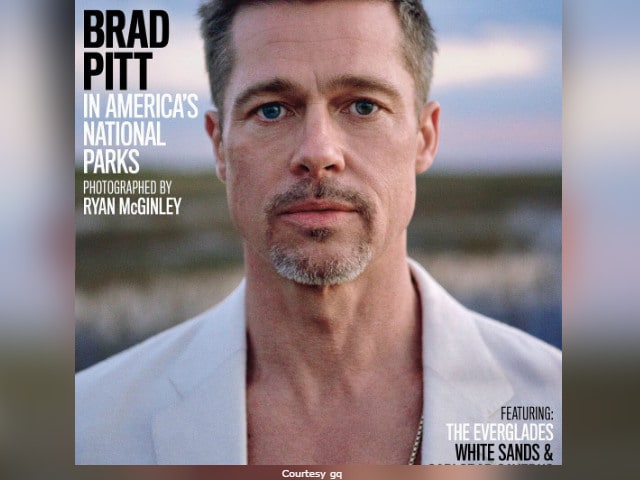 Brad Pitt on the cover of GQ magazine (courtesy gq)

Twitter takes no prisoners but Brad Pitt won't know that because he's not on it. Good choice because he won't have to read posts like those below, ridiculing his GQ spread, in which he reveals exactly how shattered he is after a much publicised split from Angelina Jolie. The interview reveals, or is meant to reveal, a broken Brad, recovering from a drinking problem and an acrimonious divorce. He has been shot in accordingly heartbreaking - or meant to be heartbreaking - positions, lying crumpled and his eyes swimming. For some reason, the shoot is located in the national parks of USA, and Brad Pitt is placed in slightly odd contortions in, for instance, a cave.
Make no mistake, he looks great. In fact, several tweets expound on just how good Brad Pitt looks as a 53-year-old former boozer. But most comments on the photoshoot are mocking, like below:

Things have been tough for Brad Pitt since Angelina got gravity in the divorce. pic.twitter.com/pUz8XrioFf

I see Brad Pitt is making a comeback by starring in Zoolander 3 pic.twitter.com/dsr1Hqd6xC

the same photographer that did Harry's Another Man did Brad Pitt's GQ piece and he only has access to one (1) sweater vest apparently pic.twitter.com/pGIdgPoZf6

Is anyone going to point out that these Brad Pitt pics are just the Harry Styles photoshoot part 2 pic.twitter.com/8m9pBnMDlx

It was meant to be a PR fix. As The Guardian points out, the pictures don't help- 'Brad Pitt in America's national parks.' What next? 'George Clooney under the Caspian Sea' or 'Tom Cruise on the Arctic Shelf,' perhaps.
Brad Pitt and Angelina Jolie met while filming 2005 movie Mr & Mrs Smith. He divorced actress Jennifer Aniston, adopted Angelina's three children and had three more. Years later, in 2014, they married on their French estate. Last year, Angelina Jolie and Brad Pitt announced they were divorcing, amid allegations that the actor had been violent towards his children. He was later cleared.
Brad Pitt's earliest success was as a charming but no-good heartbreaker in Thelma And Louise. He is the star of films like Legends Of The Fall, Seven, Troy, Fight Club and the Ocean's Eleven films headlined by George Clooney. Brad Pitt has been nominated for Oscars for his work in The Curious Case Of Benjamin Button, 12 Monkeys and Moneyball. He was last seen in Allied.