Brangelina Divorce: Why is Everyone Making This About Jennifer Aniston? 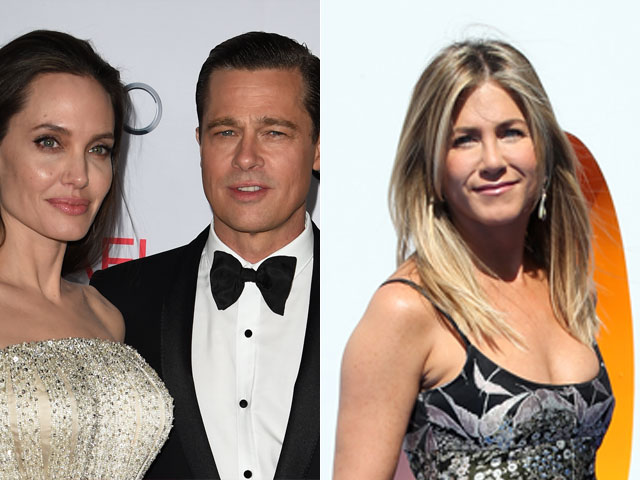 Jennifer, who raked in an estimated $21 million this past year through upfront movie fees and endorsement deals, may finally be free of the "Poor Jen" narrative because of the state of Brad Pitt's love life

The award-winning, fourth-highest paid actress in the world was thrust back into the news Tuesday and became a Twitter trending topic when word broke of her ex-husband's newest divorce.
We're talking about Jennifer Aniston.
Jennifer, who raked in an estimated $21 million this past year through upfront movie fees and endorsement deals, may finally be free of the "Poor Jen" narrative because of the state of Brad Pitt's love life.
In 2000, Brad married the Friends actress, who eventually earned $1 million an episode.
But the circumstances of their split -- which happened 11 years ago, more than double the length the marriage lasted -- have apparently caused Jennifer to be forever linked to Brad and Angelina Jolie. There was intense speculation that Brad and Angelina began their romance in 2004 on the set Mr. & Mrs. Smith, while he was still a married man.
So began the storyline that Brad moved on to another woman and began a happy family life, leaving behind poor Jen. Poor, single, Brad Pitt-less Jen. Years of tabloid headlines -- "Jen's Revenge Body;" "Jennifer Aniston's Worst Date Ever;" 'I Can't Stop Loving Brad'" -- drove the point home that this lady lacked an independent existence outside of Brangelina.
Two camps emerged, Team Jennifer and Team Angelina, which, sadly, do not refer to the actresses' respective philanthropic causes. There were even T-shirts sold for ordinary Americans to proclaim their affiliation.
Brad and Angelina were constantly invoked whenever new developments about Jennifer's love life arose, including when she announced her engagement to Justin Theroux.
Jennifer met Justin around 2011 and the pair married last year. The actress has called married life "normal and fun," which is interesting given that, according to celebrity gossip coverage, she has been eternally pregnant.
Jennifer responded to the incessant chatter about whether she will procreate, writing in the Huffington Post in July that she was "fed up with the sport-like scrutiny and body shaming" of tabloid coverage.
"This past month in particular has illuminated for me how much we define a woman's value based on her marital and maternal status," she wrote. "The sheer amount of resources being spent right now by press trying to simply uncover whether or not I am pregnant (for the bajillionth time ... but who's counting) points to the perpetuation of this notion that women are somehow incomplete, unsuccessful, or unhappy if they're not married with children."
Jennifer continued:
"We are complete with or without a mate, with or without a child. We get to decide for ourselves what is beautiful when it comes to our bodies. That decision is ours and ours alone. Let's make that decision for ourselves and for the young women in this world who look to us as examples. Let's make that decision consciously, outside of the tabloid noise. We don't need to be married or mothers to be complete. We get to determine our own 'happily ever after' for ourselves."
In a 2015 interview with the Hollywood Reporter -- a full 10 years after her divorce - Jennifer said that she and Brad wished "nothing but wonderful things for each other."
"Nobody did anything wrong. You know what I mean? It was just like, sometimes things (happen)," she said, then throwing her hands up in exasperation, according to the outlet. "If the world only could just stop with the stupid, soap-opera bulls--. There's no story. I mean, at this point it's starting to become - please, give more credit to these human beings."
Angelina -- a United Nations High Commissioner for Refugees special envoy, soon-to-be visiting professor at the London School of Economics and human rights activist who visited Syrian refugee camps earlier this month -- filed for divorce from Brad on Monday. She cited irreconcilable differences. (c) 2016, The Washington Post
(Except for the headline, this story has not been edited by NDTV staff and is published from a syndicated feed.)