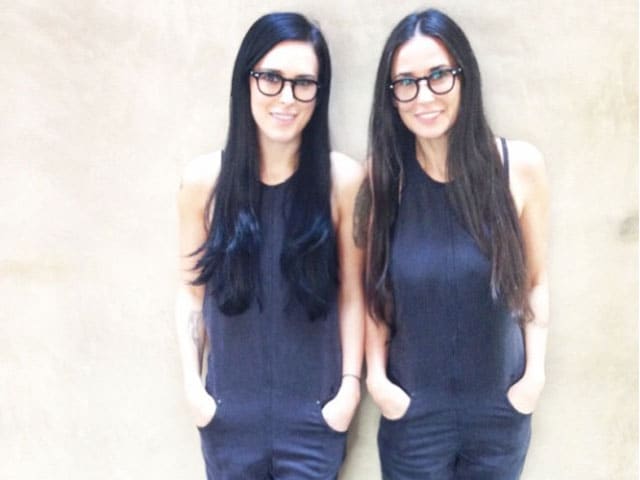 This image was posted on Instagram by Rumer Willis

Demi Moore shared the photograph of herself and her daughter, in identical navy jumpsuits and glasses to match, smiling and leaning towards one another

Actress Demi Moore and her daughter Rumer Willis looked like identical twins in a photograph featuring them in the similar outfits and pose.
On Twitter, Demi Moore, 52, shared the photograph of herself and her 26-year-old daughter, in identical navy jumpsuits and glasses to match, smiling and leaning towards one another.

Rumer Willis followed suit and shared the picture on her own Instagram account the next day, captioning it, "That moment when you realize you actually are becoming your mother #twinning #imnotmad"
The photograph was posted only days after Rumer Willis and her partner Valentin Chmerkovskiy won the 20th season of Dancing with the Stars.
Ms Moore said in an interview for the show that she actually didn't approve of her daughter joining the dance competition.
"When she said she wanted to do Dancing with the Stars, my whole insides - I have to be honest - were screaming no," the actress had said back then. "But one of the most beautiful things that I've witnessed is watching her passion become greater than her fear," she added.