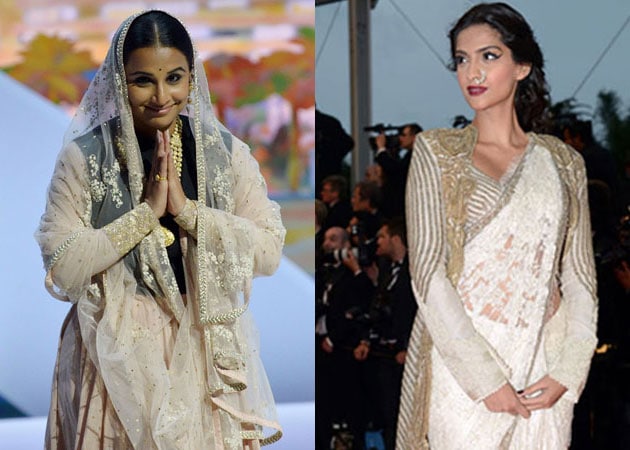 Midway into this year's Cannes film festival, we're taking fashion stock of our desi lovelies Vidya Balan and Sonam Kapoor.
Vidya predictably played it safe and ethnic with a wardrobe exclusively designed by favourite couturier Sabyasachi. Did we say safe? After a classy pre-festival outfit of a maroon and black lehenga, Vidya took us by surprise in a regal black and white lehenga, the effect of which she somewhat ruined by drawing the dupatta over her head in pallu-fashion. Vidya left folks on the French Riviera in no doubt of her nationality in a cream lehenga and black choli with a pallu
If there was a Cannes memo that said costumes from Mughal-E-Azam, only Vidya seems to have got it.
Her sari style, which rarely fails Vidya, has also been hit and miss. On day one, she got it right with a white and gold Sabyasachi number with an embellished black blouse. The next day, disaster struck in the form of another Sabyasachi sari which she wore with a matronly maroon blouse, a junky nose ring and clashing blue bead necklace. 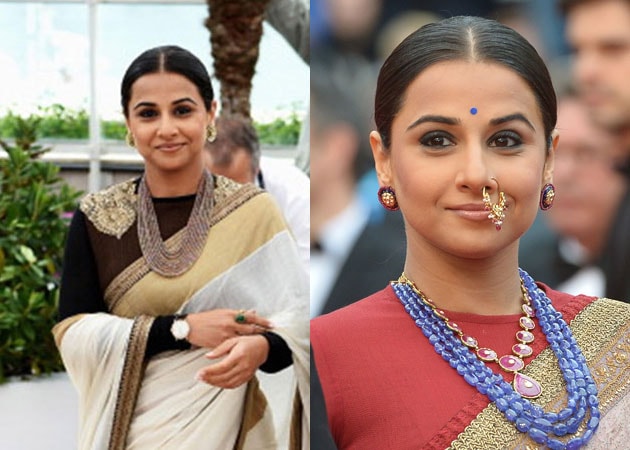 Vidya got it right in the white and gold sari but looked matronly in her outfit in the picture on the right.
Two points for the maroon lehenga and first sari, but minus 10 for the pallu and the blue beads.
However, India may not be impressed by Vidya's fashion showing at Cannes but France is. Vidya told NDTV that she's been receiving compliments galore on her look, and said that since she wears Indian outfits back home as well, she saw no reason to do things differently.
In contrast, Sonam Kapoor has had a better red carpet run, also as predicted. Her opening ceremony outfit was a stunning Anamika Khanna gold and white sari with a trailing jacket. She also wore a nose ring but unlike Vidya carried it off elegantly. 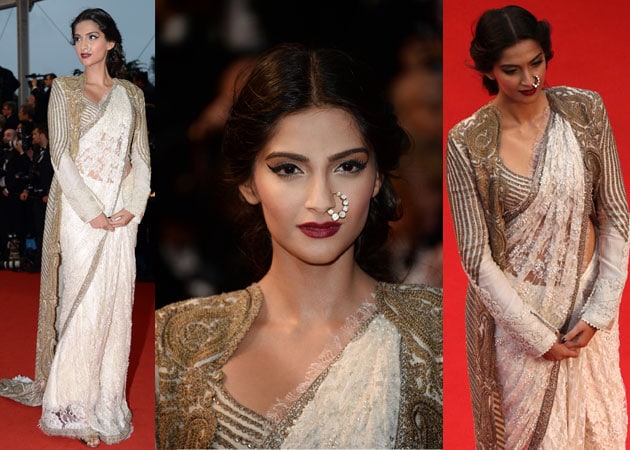 Sonam Kapoor took Cannes by storm in her Anamika Khanna sari worn with a nathni
Sonam also notched up another style high in strapless, voluminous, floral Dolce & Gabbana on day two. However, she had a hiccup with an out-of-character black net and lace Shehla Khan lehenga with an off-shoulder choli. 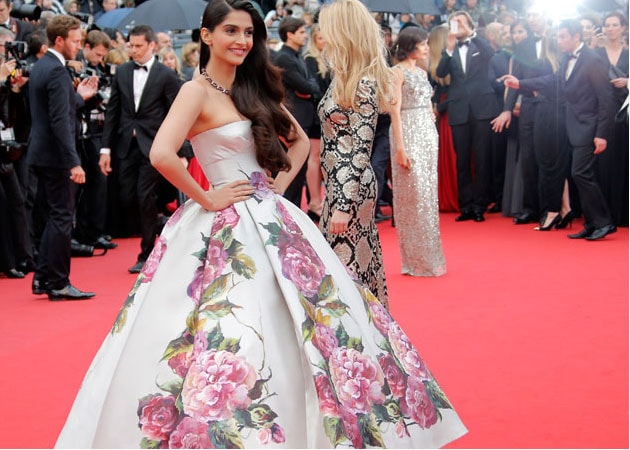 Sonam looked lovely in her floral Dolce and Gabbana dress.
Minus one point for the sheer Shehla horror but 10 on 10 for the sari and the dress.
Sonam leads, Vidya trails. Now for Aishwarya Rai Bachchan to spoil the party.