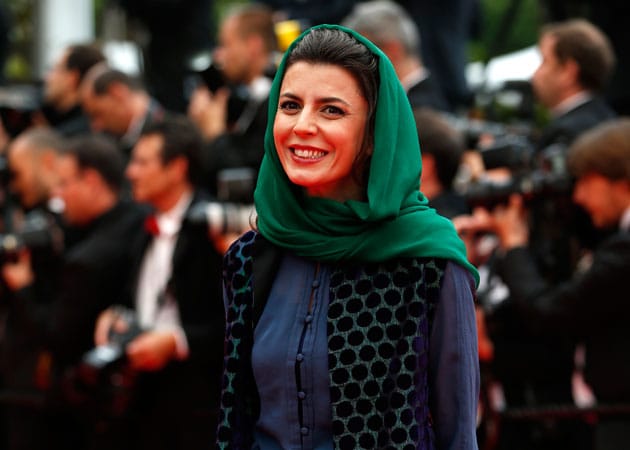 Leila Hatami who was on the jury this year at the annual Cannes festival lives in Iran. Image: AP

Leila Hatami was on the jury this year at the annual Cannes festival in southern France but lives in Iran.

Iranian actress Leila Hatami, star of Oscar-winning film A Separation, has apologised for creating a stir in her home country after kissing 83-year-old Cannes film festival president, Gilles Jacob, on the cheek.
The kiss, a simple peck on the cheek, happened at the world premiere of Grace of Monaco May 14, the opening night of the 67th Cannes International Film Festival.
Her act angered authorities in Iran. Now Leila, daughter of popular Iranian director Ali Hatami, has apologised for her act, reports the state's news agency the Islamic Republic News Agency (IRNA).
"I am so sorry for hurting the feelings of some people," she wrote in a letter to Iran's cinema organisation, cited by IRNA.
"My pre-emptive action of hand shaking was fruitless," Hatami wrote, explaining the kiss.
"Although I am embarrassed to give these explanations, I had no choice but to go into details for those who could not understand the inevitable situation that I was stuck in. In my eyes, he is certainly like an old grandfather who was also my host," she added.
A photograph carried by Iranian media showed Hatami kissing Jacob at the opening of the festival earlier this month, prompting a reprimand, reports aljazeera.com.
"Those who attend intentional events should take heed of the credibility and chastity of Iranians, so that a bad image of Iranian women will not be demonstrated to the world," said Hossein Noushabadi, the deputy culture minister.
"Iranian woman is the symbol of chastity and innocence," he said. Leila's "inappropriate presence" at the festival was "not in line with our religious beliefs".
A group of female Iranian students is seeking legal action against Hatami, calling for her to be sentenced to a jail term and lashed, according to the Iranian website Tasnim News.
Leila Hatami was on the jury this year at the annual Cannes festival in southern France but lives in Iran.