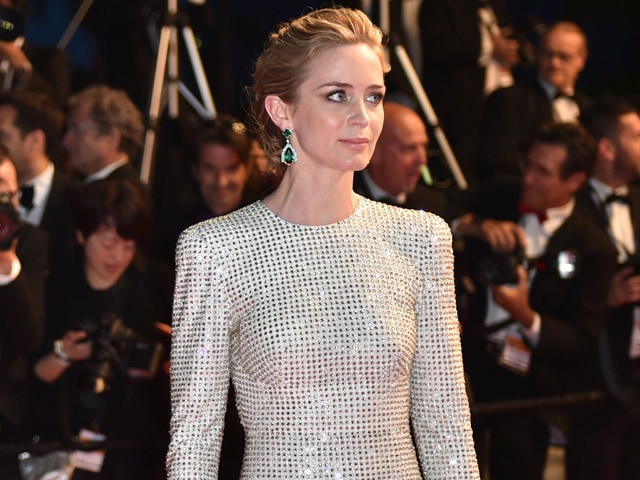 Emily Blunt at the screening of Sicario at the Cannes Film Festival. (Image courtesy: AFP)

A dark American thriller about a covert CIA operation against Mexican drug gangs starring Emily Blunt and Benicio Del Toro wowed critics at the Cannes Film Festival on April 19.
Sicario pulls no punches in its depiction of the US war on drugs - a subject Benicio Del Toro said was close to his heart.
"I've done many movies that deal with that part of the world and I'm very sensitive about what's happening on both sides of the border with drugs," he told reporters after the screening.
Canadian director Denis Villeneuve said the script was knocking around for several years before he snapped it up.
"People were afraid of it because the lead was a female character and (the scriptwriter) was asked several times to re-write the part for a man," he said.
Woman in a man's world
The role of women has been a dominant theme throughout this year's Cannes festival, but Emily rejected the idea that her character represented some sort of female empowerment.
"I get asked a lot about playing tough female roles, but I don't really see them as tough," said the British actress, who has become a star after roles in Edge of Tomorrow and The Devil Wears Prada.
"There are plenty of strong women out there and I don't think they can be compartmentalised as one thing," she said.
Sicario follows a female FBI officer (Emily Blunt), who gets attached to a CIA black ops unit working on both sides of the border with Mexico.
The audience shares her gradual realisation about the uncomfortable, ends-justifies-the-means nature of the mission, as the tension builds towards a brutal finale. "I found this character strangely quite damaged and vulnerable and struggling in the role of being a female cop. She's trying to survive in a predominantly male profession," said Emily.
'Blisteringly intense'
Villeneuve, who has recently signed up to direct a sequel to sci-fi classic Blade Runner, said he had been looking for a script that dealt with the US-Mexico border region for several years.
"We all know how much violence is there. As a North American, I share part of the responsibility for that. For me, the movie is not about Mexico, it's about America," he said.
Villeneuve made his name with the award-winning French-language film Incendies before switching to English for 2013's Prisoners, starring Jake Gyllenhaal and Hugh Jackman.
Co-star Josh Brolin, who was in similar border territory in 2007's No Country for Old Men, plays a CIA officer whose laid-back style brings some light relief to the film. He said that was to balance the "very heavy" subject matter.
"My job in the movie is to be as anti-profound as possible," he said.
Brolin said he initially turned down the role as he was busy with a number of other projects.
"I got lost in the work and was asked to do this film by Denis and I said no, stupidly," he said.
"Emily came round and made me feel appropriately stupid for turning down the role, and thank God," he added.
Initial reaction from critics was very positive, with comparisons to thriller classics such as Heat, Zero Dark Thirty and North by Northwest.
Industry magazine Variety called it "a blisteringly intense drug-trade thriller that combines expert action and suspense with another uneasy inquiry into the emotional consequences of violence".
Screen International said it "moves with grim tenacity, confounding expectations until its very final sequence".
It remains to be seen whether it can best the more arthouse fair in the running for the Palme d'Or prize at Cannes, which will be chosen on May 24 by a jury led by No Country for Old Men directors the Coen brothers.
"It's unusual for the Palme to go for a genre pick," said Toronto Star critic Peter Howell. "But it's happened before with 'Pulp Fiction' so it's definitely a contender."