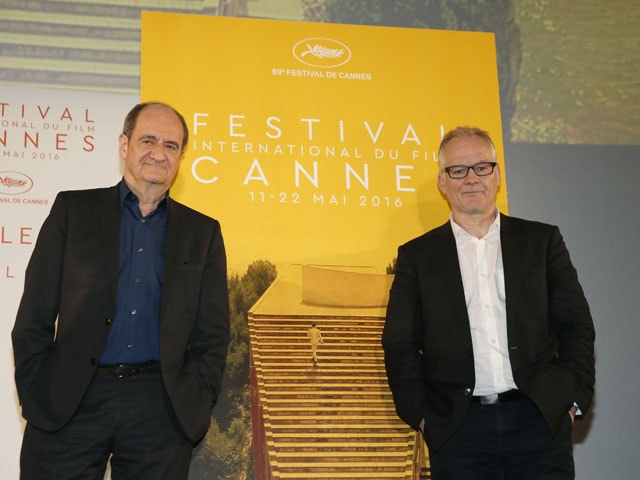 Thierry Fremaux, Pierre Lescure at a press conference on April 14 in Paris

Hollywood actors-turned-directors Jodie Foster and Sean Penn will premiere their latest films at Cannes next month, joining a star-studded cast at the world's most prestigious film festival.
Director Steven Spielberg will also unveil his version of Roald Dahl's classic children's book The BFG (Big Friendly Giant) at the French Riviera movie extravaganza.
Mr Foster's Wall Street thriller Money Monster stars George Clooney while Sean Penn's former girlfriend Charlize Theron is the lead in his love story set among aid workers in Africa, The Last Face.
Women directors have their best showing for five years in the main competition, with three among the 20 competing for the Palme d'Or top prize, led by Britain's Andrea Arnold, whose American Honey stars maverick American actor Shia LaBeouf in a film about the macho culture of a sales team.
Cannes has been repeatedly criticised for being a 'boys' club' with no women at all selected in 2012 after a record four were included the previous year.
The festival's feminist credentials took another battering last year when it emerged that women were banned from its glamorous red carpet premieres for not wearing high heels.
Both Jodie Foster and Steven Spielberg are showing their films outside of Cannes' main competition in a year which is thick with Hollywood stardust.
Scandal-hit Almodovar
The paparazzi will have their hands full, with Twilight superstar Kristen Stewart in two films and Ryan Gosling, Keanu Reeves and Star Wars actor Adam Driver also on the Croisette.
After his years in the wilderness following the critical mauling of Showgirls, Total Recall director Paul Verhoeven returns to the main competition for the first time since 1992, when his steamy thriller Basic Instinct set pulses racing.
Despite a controversy raging in Spain over Pedro Almodovar being named in the Panama Papers leak, the organisers included his new film Julieta in the main competition.
The Spanish director -- a leftwinger known for his support of environmental causes -- cancelled a press conference last week to promote the story of a girl who disappears for a decade, and did not show up at another event in Barcelona.
"I am very happy to have been selected," Pedro Almodovar said in a statement after the line-up was announced. "Given who else has been chosen it looks like a big year," he added.
The official selection is a mix of big surprises and Cannes regulars, with British director Ken Loach making the final cut despite rumours that his I, Daniel Blake might be left out.
The biggest surprise was the absence of two-time Cannes winner Serbian master Emir Kusturica, whose On the Milky Road stars Monica Bellucci.
Africa, Middle East left out
"We know the risks we are taking and risks sometimes end in pain," festival chief Thierry Fremaux told reporters in Paris.
"But we liked (these films) and we want to share them with you because we think they are important," he added. He said it was a "festivals of stars, of cinematic auteurs and of an extraordinary geographic diversity." In all, 28 countries are represented between the competition and its Un Certain Regard sidebar.
However, journalists were quick to point out that there was only one Latin American entry in the main competition and no films from Africa, the Middle East or Italy, traditionally one of the festival's mainstays.
Fremaux said there could still be some last-minute adjustments to the line-up, hinting that a Panamanian film with "a story which is very much in tune with the news" could yet make the final cut.
He joked that the mystery film was "very well financed", a reference to the Panama Papers leak, which exposed the way the rich and powerful hide their money.
In the one major innovation, Cannes' closing night film -- the slot once filled by Spielberg's E.T. and Ridley Scott's Thelma & Louise -- is being scrapped.
Instead the movie that wins the Palme d'Or will be screened again, Mr Fremaux told a press conference that was delayed by a protest by French film and theatre workers.
The Cannes Film Festival will be held in the French Riviera from May 11 to 22.
(This story has not been edited by NDTV staff and is auto-generated from a syndicated feed.)