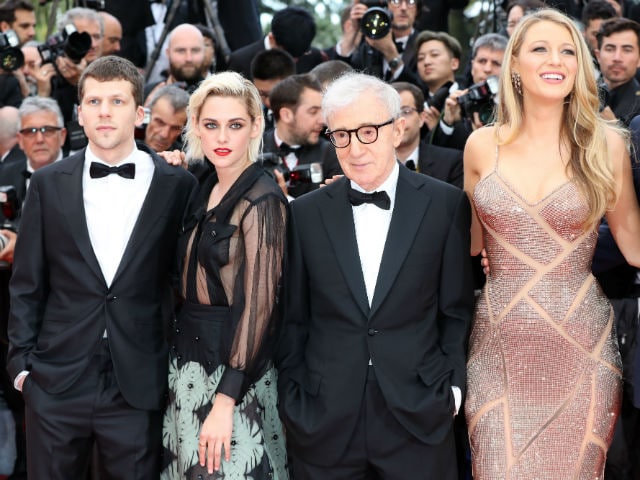 Hollywood decamped to Cannes on Wednesday where Woody Allen's new romantic film set in cinema's golden age received mixed reviews from critics as it launched the world's top film festival.
The first red carpet of the festival lit up with some of film's biggest names as a forecast downpour stayed away long enough for them to saunter up the stairs of the main festival venue.
There were the stars of Woody Allen'sCafe Society -- Kristen Stewart, Jesse Eisenberg and Blake Lively who exclaimed: "It didn't rain!"
Susan Sarandon, in town for a series of talks on women in the film industry, walked up the carpet in a suit and flat shoes in a pointed dig at Cannes' traditional dress code.
Victoria Beckham, Eva Longoria, Jessica Chastain, Justin Timberlake, Julianne Moore and Naomi Watts also set cameras flashing before they sat down to enjoy Woody Allen's third film which opened the 12-day festival.
Critics, who saw the film earlier, praised the film's beauty and the performances of Kristen and Eisenberg, of The Social Network fame, but complained that it lacked depth.
"Watchable as it is, it never quite overcomes the sense that it's a lavish diagram working hard to come off as a real movie," wrote Variety critic Owen Gleiberman.
"It's one of those Allen films that keeps talking about passion instead of actually making the audience feel it," he added. Shot in dreamy technicolour hues, it highlights what another critic called "the selfishness of being happy" as Kristen and Eisenberg voyage through infidelity and heartbreak from 1930s Hollywood to bohemian New York.
The film follows Bobby (Jesse) as he heads to Hollywood to score a job with his big-shot agent uncle Phil -- played by Steve Carell -- and falls in love with his winsome secretary and mistress Vonnie (Kristen).
'Sweet, sad, insubstantial'
"Woody Allen's Cafe Society is a sweet, sad, insubstantial jeu d'esprit, watchable, charming and beautifully shot," wrote Guardian film critic Peter Bradshaw, praising Kristen and Jesse for "charming and intelligent" performances.
A spate of self-deprecating jokes steeped in Allen's Jewish heritage drew the most laughs from the audience.
Woody Allen said that Kristen, set for a stellar Cannes where she will also appear in competition film Personal Shopper, had been perfect for the role.
"I needed somebody who could play an adorable little secretary from Nebraska -- this sweet little girl just as cute as a button, and later in the movie you could see her in furs and jewels and she would be completely believable," he said.
Kristen, sporting a sharp bleach blonde bob and dressed all in white, is known more for her edginess than cuteness and looked amused at the description.
"I auditioned for this part. I really had to prove myself because I don't know if that lovely little lady was something he saw immediately," she said.
Jesse Eisenberg's Woody script
Her co-star Jesse was left red-faced when a reporter revealed that he had written a script about Woody Allen when he was a teenager. "I was so inspired by discovering Woody Allen that I wrote a script that was based on him and it got sent to agents because they thought it was funny and it got sent to his lawyers who didn't think it was funny. And they sent me cease and desist letters and that was the end of that," he said.
"And it looks like now this might be the end of this," he said, looking sheepishly at Woody Allen.
Woody Allen's movie kicks of 12 heady and exhausting days of films, networking and partying in Cannes, as the population of the French Riviera town is set to nearly triple to some 200,000 people. The event has heaped pressure on French authorities already on high alert six months after terror attacks left 130 dead in Paris.
Hundreds of extra police officers have been deployed with daily bomb sweeps of the main venue and long queues at checks to get inside.
Nearly 90 feature films from all over the world will be shown in this year's official selection, including 21 which are in the running for the Palme d'Or main prize.