Cate Blanchett Reveals She Had 'Many' Relationships With Women 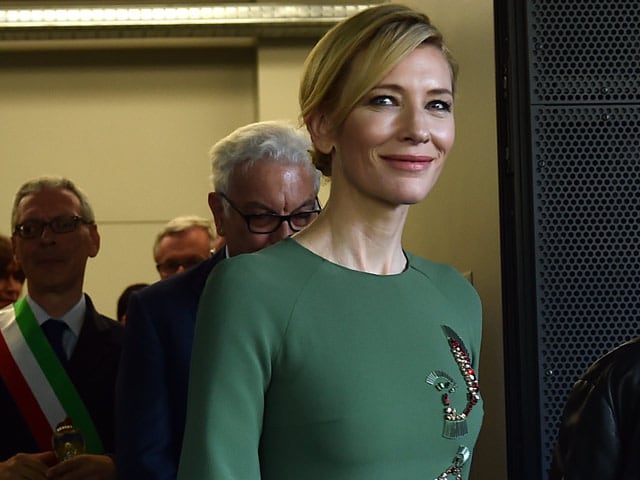 Cate Blanchett at an event in Australia. (Image courtesy: AFP)

Cate Blanchett made the comment while promoting her latest film Carol, in which she plays the role of a bisexual woman

Happily-married Oscar-winning Australian actress Cate Blanchett has revealed she had "many" past relationships with women in an interview with an American magazine.
The 45-year-old actress made the comment while promoting her latest film Carol, in which she plays the role of a bisexual woman in 1950s New York.
When asked if it was her first turn as a lesbian, Cate asked, "On film - or in real life?"
Pressed by Variety magazine for details about whether she had past relationships with women, she said, "Yes. Many times," without elaborating.
Cate has been married to screenwriter husband Andrew Upton for 18 years. They three have sons - Ignatius, 6, Roman, 10, and Dashiell, 13 - and in March adopted a baby daughter.
In the film, which is due to premiere at Cannes this month, New Yorker Carol Aird (Cate) embarks on a love affair with a young department store clerk Therese Belivet, played by Rooney Mara.
While giving no details about her past romances, Cate said in the interview that she was someone who valued her privacy and never uses Twitter or Googles herself.
She has also never watched herself in movies. "I never think I have it," she said. "Maybe that's why I keep working."
Cate started out as a theatre actress in Sydney, where she won critical and popular acclaim and has gone on to win two Oscars for her roles in The Aviator and Blue Jasmine.
She is set to leave her Sydney home to move to America later this year, where Upton will pursue writing opportunities and Blanchett will continue her film career.