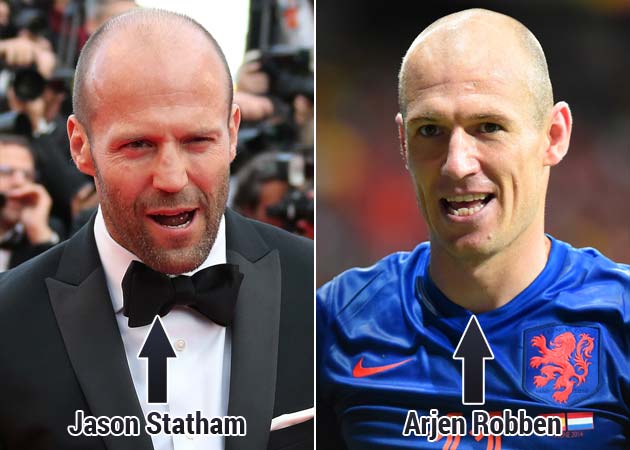 One is an action star, the other drives all the action on the football field.

One is an action star, the other drives all the action on the football field. Netherlands' goal scoring hero Arjen Robben, whose double goals helped the Dutch to a stunning 5-1 victory over Spain in the ongoing FIFA World Cup, is a dead ringer for Hollywood actor Jason Statham, star of films such as The Transporter, The Expendables, Revolver and Snatch. (Also Read: Celebrity Lookalikes: Brazil's Neymar Jr is a Dead Ringer for Kunal Khemu)
Jason Statham, 46, was a keen footballer before eventually turning to modelling and acting. He played a soccer coach in The Pink Panther 2, co-starring Steve Martin and Beyonce.
The 30-year-old Robben, who is regarded as one of the finest wingers of his generation, plays a leading role in big matches and remains one of the first names on the Netherlands teamsheet.
The 2014 World Cup could prove to be Robben's last while Statham's career is still going strong and he may portray the main antagonist in Fast and Furious 7.
Here's what Twitter had to say about this pair of celebrity lookalikes:

robben is the 'faces of meth' for jason statham

11 for NED looks like a Jason Statham that's really good at soccer.