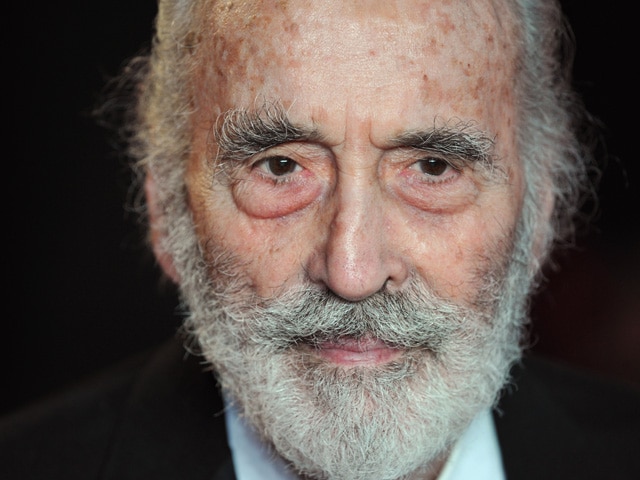 Tall, pale and with a deep, resonating voice, Sir Christopher Lee will forever be remembered for his spine-chilling performance as Dracula

British actor Sir Christopher Lee, the ultimate movie villain who played the role of Dracula and starred in The Lord of The Rings, has died aged 93, a local government official told AFP on June 11.
"I can confirm we issued a death certificate on June 8. Sir Christopher Lee died on June 7," said a spokeswoman for the Royal Borough of Kensington and Chelsea in London.
According to The Daily Telegraph newspaper, Sir Christopher died in hospital, where he had been treated for respiratory problems and heart failure over the preceding three weeks.
"The family wishes to make no comment," his agent told AFP.
Tall, pale and with a deep, resonating voice, Sir Christopher Lee will forever be remembered for his spine-chilling performance as Dracula in the cult Hammer Horror movies.
He went on to scare a new generation as Saruman in the adaptation of JRR Tolkien's The Lord of the Rings trilogy and as Count Dooku in the Star Wars prequels.
The London-born actor appeared in more than 250 films and television productions, including the James Bond movie The Man with the Golden Gun (1974).
Although he expressed frustration at being typecast as the villain, he admitted he enjoyed the roles. "They're more interesting, because there's a greater variety you can apply: you can be very cruel or charming, amusing or dangerous," he had said.
However, he criticised the gratuitous violence of many modern films, arguing the power of suggestion was more terrifying - something he mastered early on, scaring the wits out of viewers with his piercing gaze.
A lifelong devotee of heavy metal - a genre partly inspired by the sort of horror films he starred in - Sir Christopher made several albums featuring his booming, classically-trained bass voice.
His last album was Metal Knight, released on his 92nd birthday, followed by a metal Christmas carol in December 2014.
Sir Christopher married former Danish model Gitte Kroencke in 1961 and had one daughter, Christina.