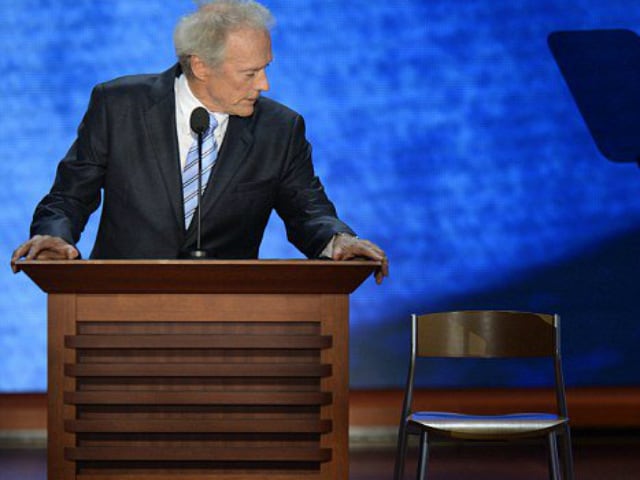 In 2012, Clint Eastwood stood on stage at the RNC, accompanied by naught but an empty chair. He pointed at said chair and announced, "So I've got Mr. Obama sitting here." It was also apparently plan B. Plan A was to show a scene from Eastwood's film The Outlaw Josey Wales

In real life, it seems Clint Eastwood has slowly morphed from the justice-loving Dirty Harry to his cranky old man character from Gran Torino, complaining about today's generation and regretting the past, especially that speech to a chair.
In an interview with Esquire, he said that Donald Trump is "on to something" and finally explained why he - a fully grown adult man - spoke to that empty chair at the 2012 Republican National Convention.
Let's break it down, starting with the chair.
In 2012, Clint Eastwood stood on stage at the RNC, accompanied by naught but an empty chair. He pointed at said chair and announced, "So I've got Mr. Obama sitting here." It was a speech that prompted The Washington Post's Alexandra Petri to actually write, in an actual story, "He and the chair discussed Guantanamo and Afghanistan. It was a very communicative chair."
Petri concluded, "It was magic."
Time called it "one of the most baffling and iconic moments of the 2012 election" in a story wondering where the chair ended up. The Guardian wrote that it "turned Republican stomachs."
It was also apparently plan B. Plan A was to show a scene from Eastwood's film The Outlaw Josey Wales, Stuart Stevens, Romney's top strategist, told the Huffington Post.
Stevens shot the idea down. One can't help but wonder if he second-guesses that decision.
Now, Eastwood has finally revealed what the heck was going on that night.
And no, it didn't just "come out of the air" as he told the Hollywood Reporter in 2012. It was not rain or a falling bird. It came from a much more interesting place than the air -- like with so many questionable decisions, it began with a Neil Diamond song.
As Eastwood told it to Esquire, he was apparently hanging out backstage at the RNC, listening to Neil Diamond's I Am, I Said.

He was worried that his speech would sound like those of everyone else endorsing Romney - "I'm hearing everyone say the same thing: 'Oh, this guy's a great guy.' Great, he's a great guy. I've got to say something more," Eastwood said.
That's when the Diamond ballad reached a chorus in which he sings, "And no one heard at all / Not even the chair."
A light bulb lit up over Eastwood's head.
He told Esquire:
"And I'm thinking, That's Obama. He doesn't go to work. He doesn't go down to Congress and make a deal. What the hell's he doing sitting in the White House? If I were in that job, I'd get down there and make a deal. Sure, Congress are lazy bastards, but so what? You're the top guy. You're the president of the company. It's your responsibility to make sure everybody does well."
So he decided to call out the president. Only the president wasn't available, so he spoke to the chair instead.
And it turns out that Eastwood regrets it.
When asked what troubles him most (in his life, we suppose), his answer was "I guess when I did that silly thing at the Republican convention, talking to the chair."
And he's not too pleased with what he sees these days - that "nobody wants to work."
"That's the p--- generation," he said.
He's also displeased with people complaining of racism:
"Everybody's walking on eggshells. We see people accusing people of being racist and all kinds of stuff. When I grew up, those things weren't called racist. And then when I did 'Gran Torino,' even my associate said, 'This is a really good script, but it's politically incorrect.' And I said, 'Good. Let me read it tonight.' The next morning, I came in and I threw it on his desk and I said, 'We're starting this immediately.'"
He isn't thrilled with Trump, but will choose him in the end if only to avoid having to choose Hillary.
"It's a tough voice to listen to for four years," he said of Hillary, then conceded that choosing between her and Trump is "a tough one, isn't it?"
He doesn't agree with everything Trump says - "He's said a lot of dumb things," Eastwood said - but he thinks that voters need to "just . . . get over it."
"I'd have to go for Trump," he said. "You know, 'cause [Hillary's] declared that she's gonna follow in Obama's footsteps. There's been just too much funny business on both sides of the aisle. She's made a lot of dough out of being a politician."
Added Eastwood, "I gave up dough to be a politician."
One can only assume he's referring to his time on the California State Park and Recreation Commission or his term as mayor of Carmel-by-the-Sea, Calif., a town of under 4,000. His platform focused on overturning a law that banned people from eating ice cream outside.
(c) 2016, The Washington Post
(Except for the headline, this story has not been edited by NDTV staff and is published from a syndicated feed.)