Dev Patel: Shooting in India Helps me Connect With My Roots 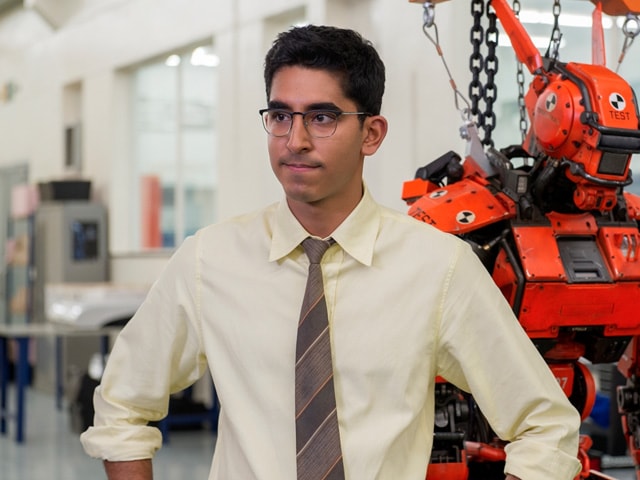 Dev Patel in a still from Chappie.

"It is a wonderful way to get in touch with your culture and with your roots," said Dev Patel

During his brief visits to India for shooting his international movies help British actor of Indian descent Dev Patel connected to the "astounding" and "inspiring" country as well as revisit his cultural roots.
"It is a wonderful way to get in touch with your culture and with your roots. I'm constantly astounded whenever I go to India. I feel so inspired by the people I interact with and with the things that I see," Dev, who sprang to global stardom with the Oscar winning Slumdog Millionaire, told IANS over phone from Berlin.
"I really hope I can continue to do that all my life," said he said, adding that he finds Indian food "great".
Just a cursory glance on the work done by Dev - be it a Mumbai slum dweller in Slumdog Millionaire, Neal Sampat of TV series The Newsroom or a manager of a hotel in The Best Exotic Marigold Hotel - shows that despite spending his growing-up days in Britain, the actor has traced the journey of an Indian man in most of his films.
Another movie, The Man Who Knew Infinity, which is a biopic on Indian mathematician Srinivasa Ramanujan, brought Dev to India. The 24-year-old actor says entering the world of complex mathematics was not easy for him.
"I spent a lot of time in southern India and did a lot of rehearsal with the director (Matthew Brown). A mathematician introduced us to the world of complex mathematics (on the set), and I'd be lying if I said I learned it, as it is so complex, that it went over my head," he said.
Now, Dev is gearing up for his movie Chappie, set to release in India on March 13.
For Chappie, Dev teamed up with Hugh Jackman and Sigourney Weaver, while he shared screen space with Hollywood legends like Richard Gere and Judi Dench in The Second Best Exotic Marigold Hotel, which was also shot in India.
When asked about Bollywood legends, Dev was quick to share his long list of favourites. "There are a couple of them. I would start with Shah Rukh Khan. He is my absolute favourite. And then, I have already worked with him but I would die to work with him again - Irrfan Khan and Nawazuddin (Siddiqui), these are my top favourites," the actor said.
The silver screen has literally captured the transformation in Dev from being a lanky teenager to a young man with a scruffy and rugged look, which is garnering a lot of attention. The actor says his "new look is for a movie".
Dev had also mentioned that when he started his career in showbiz with British TV show Skins, he was not sure where he was getting into. Now after seven years in the glamorous industry with a number of critically appreciated films to his credit, Dev is not in a mood to let success get to his head.