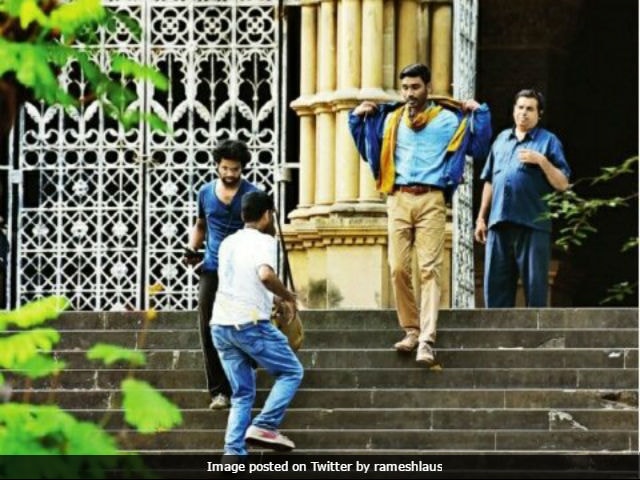 Dhanush on the sets of The Extraordinary Journey Of The Fakir (Image courtesy: Ramesh Bala)

Actor Dhanush has finally started shooting for his Hollywood debut The Extraordinary Journey Of The Fakir and the pictures of the 33-year-old actor from the sets of the movie are going viral on the Internet. The film is based on Romain Puertolas' best-selling French novel The Extraordinary Journey of the Fakir Who Got Trapped in an Ikea Wardrobe, which has been translated into English and has become an international bestseller sold in 36 nations. Earlier, the film was to be helmed by Iranian filmmaker Marjane Satrapi. However, she was replaced by Ken Scott, director of Starbuck, reported Variety. The Extraordinary Journey Of The Fakir also stars Uma Thurman, Berenice Bejo and Alexandra Daddario.

In an interview to Variety, filmmaker Ken Scott spoke about working with Dhanush, calling him a 'charming' person. "What's great is I get to work with a great actor, Dhanush, who is a huge star in India, he's a great actor, but also a great dancer, a great singer, he has a very unique way of dancing and moving, he's just very charming," Variety quoted Scott as saying.
Dhanush is currently enjoying the success of his film Power Paandi. The film, which marks the Raanjhanaa actor debut as a director, released in theatres on April 14 and received rave reviews. He will next be seen in Velaiyilla Pattathari, co-starring Kajol. The film, directed by Rajinikanth's daughter and Dhanush's sister-in-law, Soundarya, is scheduled to release in theatres on July 28. VIP 2 marks Kajol's comeback to the Tamil film industry after two decades.
His other upcoming projects are - Enai Noki Paayum Thota and Vada Chennai. Dhanush is also producing Rajinikanth's upcoming film with Pa Ranjith.