Donald Trump is POTUS. A Look Back at Top Celeb Moments From the Election 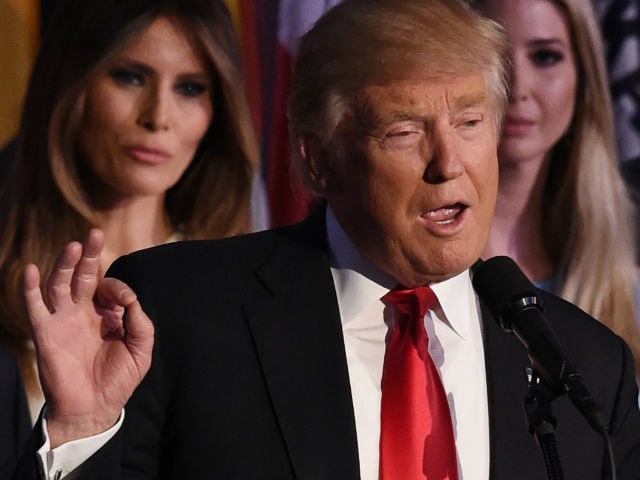 From Lena Dunham's backing Hillary Clinton with her enthusiastic fashion choices to Sarah Palin's endorsement of Donald Trump, the cult of celebrity has reigned supreme during this most unusual presidential race

The cult of celebrity has reigned supreme during this most unusual presidential race, and no, we're not just talking about the candidates themselves - one a bona fide reality star and the other a household name for decades. No, we're talking about those other celebrities, the actual famous folk who have made stump speeches, embarrassing gaffes and political Instagram posts part of their regular publicity blitz in 2016.
Despite Wheel of Fortune host Pat Sajak's warning against the celebrity endorsement, the alluring star stamp of approval will likely never get old. Policy be damned, what the public really wants to know is how Chachi Arcola feels about this election. The stream of celebrity political consciousness was seemingly unending during this election cycle with one big name endorsement replacing the last before you could say "who?" or "huh?" Here are some of the standout moments that reminded us why politics and the pretty people don't always mix.
The USA Freedom Kids v Donald J Trump
OK, this Mickey Mouse Club for kids who value "ameritude!" isn't exactly famous, famous. But in the tradition of Romney Girl and Obama Girl, these youngsters who sang songs about freedom while executing cute dance moves in their patriotic cheerleader costumes at Donald Trump rallies were the first unofficial mascots of the campaign. A video of the trio singing their Trump-themed Freedom's Call (sample line: "enemies of freedom face the music, come on, boys, take 'em down!") at a Florida rally in January has been viewed more than 6 million times. But since their viral stardom - they even appeared on Inside Edition - the Freedom Kids' relationship with the Trump campaign has soured somewhat. The manager of the group is suing the Trump campaign for compensation.

Sarah Palin's adjective-packed endorsement of Trump
The former governor, vice-presidential candidate and star of Sarah Palin's Alaska showed up in a bright and jangling bolero jacket to throw her political weight behind Trump. And the subsequent speech she gave was just as technicolored. The 2,782 words that followed will undoubtedly go down in election history as the most head-scratching and rhyming rallying cry in recent memory. She called on "farm families, and teachers, and teamsters, and cops, and cooks," plus "rock 'n' rollers" and "holy rollers!" to support Trump, who, according to Palin, came from "the private sector" where "you actually have to balance budgets in order to prioritize, to keep the main thing, the main thing, and he knows the main thing."

Lena Dunham's campaign fashion
The enthusiastic backing of Girls creator/actress Lena Dunham no doubt helped Clinton cultivate her millennial girl-power cred. Did we mention Dunham was enthusiastic? Her kitschy campaign-trail costume choices went well beyond the typical logo tee: There was the star-spangled drum-majorette number emblazoned with "Hillary," that pearl-encrusted pantsuit with "Vote 4 Hillary" typed out in faux jewels on the back. Oh, and the mod dress with "Hillary" printed on the fabric. It was enough to make the campaign's other fashion moments - Marco Rubio's high-heeled boots (memba them?) and Katy Perry's turban - seem as dull as a power pantsuit.

The naked celeb constituency
If Dunham shows her support for Clinton by wearing actual clothes, then Perry (plus Madonna and even James Franco) did the exact opposite. Call them Clinton never-wearers. It all started when Perry, who's a big fan of HRC, promised on Instagram to "use my body as click bait to help change the world." Basically the Roar singer shed her clothes for a Funny or Die video promoting the ease of voting. (So easy in fact that you can do it naked! Of course, you can't, though.) Madonna then followed suit with a since deleted naked selfie entitled "Nude Voting series # 1." Franco joined in with his own barely there video supporting Clinton.
Scott Baio, just Scott Baio
Remember "Charles in Charge"? How about "Joanie loves Chachi?" Apparently Trump does. Scott Baio, the star of the '80s sitcom about a manny and his mini charges, was the biggest "get" at the 2016 Republican National Convention in Cleveland this summer. Baio, a card-carrying Republican and a prolific political tweeter, told the convention crowd, "Let's make America America again." Later he told the Hollywood Reporter that he didn't care if his staunch support of Trump cost him his career in left-leaning La La Land. "I genuinely, in my heart, do not care if I ever work again. I don't care. I'm comfortable and I've got a great life, but If I don't have a country that is recognizable to me, I've got nothing." Unfortunately, Baio's fellow B-listers for Trump have had a rougher go of it. Antonio Sabato Jr. (best known as the guy from that soap) told Variety that he had officially been blacklisted after speaking at the RNC. Conservative pundit and "Clueless" actress Stacey Dash said in the interview that she was being "persecuted in Hollywood."

Sarah Silverman burning the Berners
The comedian was a big-name Bernie Sanders supporter until she wasn't. During an appearance alongside Sen. Al Franken at the Democratic National Convention, Silverman, who was at the podium on the main stage "stretching" (filling time between speakers), delivered a unscripted message to the booing Sanders supporters being purposefully disruptive on the convention floor: "Can I just say to the 'Bernie or Bust' people? You're being ridiculous." And the crowd went wild. And then the Bernie never-enders started up again. But Silverman still had her moment in the spotlight.

Billy Bush, burned by a hot mic
Who would have thought that the Bush to have the biggest role in the 2016 presidential campaign would be Cousin Billy, the Today show host? (Sorry, Jeb.) Bush infamously appeared on a video that surfaced last month in an outtake from Trump's appearance on Access Hollywood, Bush's previous show. While Trump had the nastiest lines (bringing the word "p--y" into national political discourse), the TV host didn't come off so great, either, egging pre-candidate Trump on and leering at an actress on set. Trump kept his gig as the GOP's nominee, but Bush quickly resigned from his NBC perch.
©2016, The Washington Post
(Except for the headline, this story has not been edited by NDTV staff and is published from a syndicated feed.)