Everything You Need to Know About Daniel Craig's Star Wars Cameo 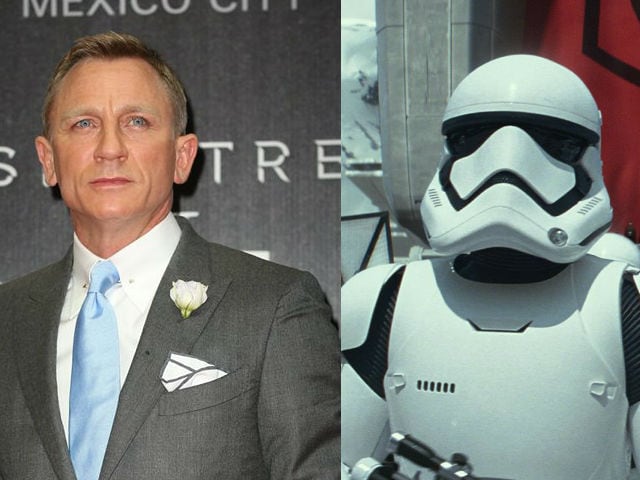 Daniel Craig (left) at the premiere of SPECTRE in Mexico. A still from The Force Awakens (right)

James Bond made a brief and barely recognizable appearance in Star Wars: The Force Awakens. The Stormtrooper who is Jedi mind-tricked by Rey into releasing her from First Order captivity - that was actually Daniel Craig - JB-007. Oh yes, Daniel Craig's Stormtrooper number matched his licence to kill

ICYMI, James Bond made a brief and barely recognizable appearance in Star Wars: The Force Awakens. In July, actor Daniel Craig very emphatically told Entertainment Weekly that rumours of a cameo were untrue. "Why would I ever bother doing something like that? Pffft. Play an extra in another movie," he said. Turns out, he lied.
If you've watched the movie - it's been in Indian theatres for almost a week so if you haven't, what the heck are you waiting for? - you've probably identified the 007 cameo already. The Stormtrooper who is Jedi mind-tricked by Rey (played by Daisy Ridley) into releasing her from First Order captivity - that was actually Daniel Craig. (Also Read: Leonardo DiCaprio Was Offered a Role in Star Wars Film. True Story)
The name was 007. JB-007. Oh yes, Daniel Craig's Stormtrooper number matched his licence to kill. In the scene, Rey is strapped into an interrogation chair and focuses her new Jedi powers on the Stormtrooper at the door. "You will remove these restraints and leave this cell with the door open," she intones. "What did you say?" answers a familiar voice, "I'll tighten these restraints, scavenger scum." Rey's second try is successful, however, and she even gets JB-007 to drop his weapon before he leaves.
The actual filming was likely easy to keep secret because Daniel Craig was shooting part of SPECTRE in England's Pinewood Studios, where The Force Awakens was also made. It would have been easy enough for him to sneak into the Star Wars set in Stormtrooper disguise. Had it not been for actor Simon Pegg - who voices Jakku junk dealer Unkar Plutt - the cameo might have been kept completely under wraps. In May, Simon Pegg was asked about his role in the Star Wars film and said, "I wasn't a Stormtrooper. Daniel Craig, he was a Stormtrooper. I shouldn't have said that." Which is when Mr Craig issued his rebuttal.
Two weeks ago, on the eve of the film's release abroad, the Entertainment Weekly reporter who received and reported the denial wrote a piece that began: "Daniel Craig lied to me." Not only did the actor deny he had a cameo, "he responded to my query with barely suppressed rage," writes Chris Lee. (Also Read: Scenes From Star Wars: The Force Awakens Were Deleted. Here's Why)
I'll lie to you, reporter scum.
Tell us what you thought of Stormtrooper Daniel Craig in the film.