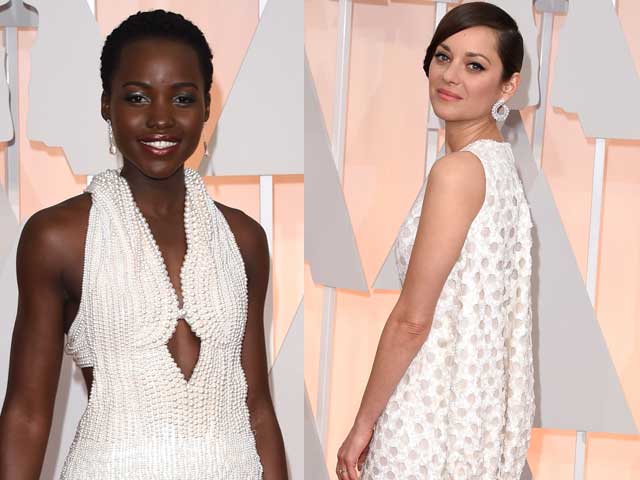 Lupita and Marion at the Oscars (Image courtesy: AFP)

Is it safe to admit I miss the Mani Cam?

The E! network claims it canceled the much-maligned diorama, down which red carpet prowlers used to "walk" their polished, jewel-bedecked fingers, even before several prominent actresses refused to participate recently. But the actresses' conscientious objection helped publicize a Twitter campaign, #AskHerMore, advocating for interviewers to go beyond the supposedly superficial, sexist question, "Who are you wearing?" followed by the obligatory: "Stunning! You look stunning!"

And so Sunday night viewers heard Marion Cotillard, in a white gown looking like someone had gone at it with an oversize hole puncher, talking about not the company that made it (Dior, for which she is what they used to call a spokesmodel) but her ... acting. Laura Dern, in what amounted to strapless metallic armor by Alberta Ferretti, brandished a large turquoise ring by Bulgari that she said had been created to raise awareness about lung cancer. And Patricia Arquette, luminous in a one-shouldered, white-bodiced, black-skirted ensemble by her dear friend Rosetta Getty, discussed her support of ecological sanitation work, scoffing at "this silly Mani Cam business going on."

Personally, I always rather enjoyed the Mani Cam, which had its debut in 2012, feeling it a sort of freaky postfeminist version of a Joseph Cornell box. I'm not sure the public is better served by 10-second plugs of these worthy causes than by hearty escapist chuckles at the absurdity of current celebrity culture.

But the actresses at the 2015 Oscars seemed determined to show their seriousness, not just in their words but with, yes, what they wore.

Many of them played down their figures in favor of dresses that emphasized elaborate craftsmanship, perhaps giving the RuPaul model mantra "you better work" a whole new meaning. "All hand-sewn," Felicity Jones crowed of her pale gray ball gown by Sarah Burton for Alexander McQueen with a heavily pearl-encrusted bodice, a departure from her customary simplicity.

"She is just so elegant, do you not think?" said the E! hostess Kelly Osbourne, seeming to hopefully invite a dissenting opinion.

Lupita Nyong'o also loaded up on pearls; indeed, the halter of her white Calvin Klein dress, which had a discreet diamond-shaped cutout, was strung with a reported 6,000 of them. Julianne Moore's strapless Chanel column, also white, was dotted several times on the horizontal with little black ... well, what were they, exactly? Fancy ants on a log? Reese Witherspoon also bisected a plain white dress, by the usually sexy Tom Ford, with stern black lines.

In the fashion industry, the return of the disgraced designer John Galliano to the house of Margiela has been big news, but Cate Blanchett's choice to wear one of his gowns, black and sleeveless, was muted somewhat by the large turquoise-beaded Tiffany necklace with which she accessorized it.

"You know, we toss around the word 'statement' necklace, but that truly is a statement necklace," said the E! presenter Giuliana Rancic and joining her to discuss it, to instant cybergroans, was Khloe Kardashian in Lanvin.

Even on Kardashian, though, cleavage was covered, while shoulders, that symbol of strength and resilience, were defiantly bared. Kerry Washington, in a Miu Miu gown with peplum; Nicole Kidman, in a red-belted gold Louis Vuitton one; and Rosamund Pike, in red Givenchy that seemed to brim with roses, all went strapless.

Emma Stone, though, previously heralded for bold choices such as a pantsuit, looked here in pea-green, long-sleeved Elie Saab like a mother of the bride. Lady Gaga provided the much longed-for frisson of eccentricity by accessorizing her white Azzedine Alaia frock with red dishwashinglike gloves.

And she wasn't the only one conjuring the kitchen. Naomi Watts, in apronlike Armani Prive with a black band at her back, described how she had made a frittata that morning and her brother had Instagrammed it - a modern version of the old Enjoli commercial. She can bring home the bacon, fry it up in a pan and never let you forget the Mani Cam.