First Pictures: Angelina Jolie's Wedding Dress Had Her Children's Drawings on it 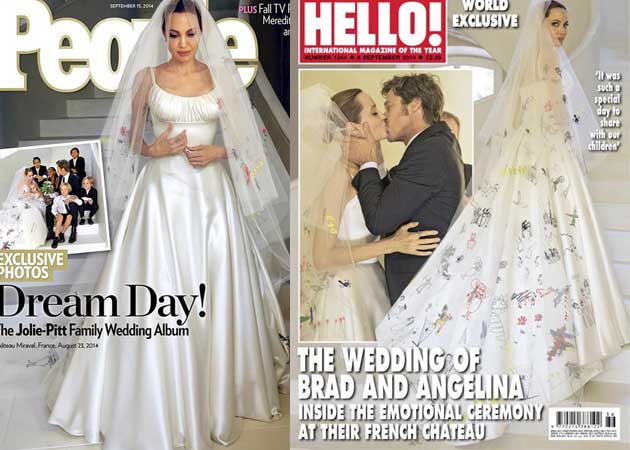 Angelina's dress was created by Luigi Massi of Atelier Versace, whose designs the Maleficent actress regularly wears on red carpets.

Not only did Angelina Jolie's six children play important roles in her hush-hush wedding to Brad Pitt on August 23, they also helped create her wedding dress. First pictures of the bride have been published in People and Hello magazines and show Angelina wearing a simple full-skirted dress and a voluminous veil decorated with drawings by the little Jolie-Pitts: Maddox, Pax, Zahara, Shiloh, Knox and Vivienne.

Angelina's dress was created by Luigi Massi of Atelier Versace, whose designs the Maleficent regularly wears on red carpets.

The groom recycled a suit from his wardrobe but had to borrow a tie from Maddox and Pax as he forgot to pack one of his own.  The couple's wedding rings were created by jeweler Robert Procop who also co-designed Angelina's engagement ring with Brad.

Angelina, 39, and Brad, 50, were married in a chapel on their French estate, Chateau Miraval. Maddox and Pax walked Angelina down the aisle, Shiloh and Knox were ring-bearers, and Zahara, and Vivienne served as flower girls.