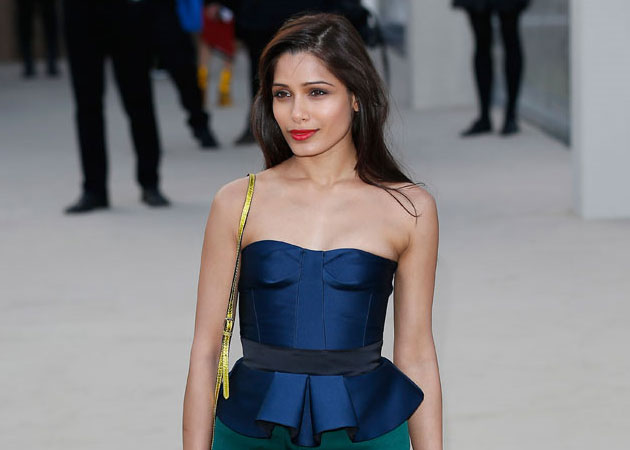 Freida Pinto, the global ambassador of the Because I am A Girl Campaign (BIAAG), visited Ethiopia for the first time as part of her role to support Plan International's projects. She says educating and empowering girls is the way forward worldwide.

Slumdog Millionaire actress Freida Pinto, the global ambassador of the Because I am A Girl Campaign (BIAAG), visited Ethiopia for the first time as part of her role to support Plan International's projects. She says educating and empowering girls is the way forward worldwide.
Because I Am a Girl (BIAAG) is Plan's global initiative. Launched Oct 11, 2012, it is aimed to create sustainable projects in developing countries to give girls access to clean water, food, health care, education and protection from violence and exploitation.
"If we educate and empower girls, they will reach their fullest potential, pulling themselves and their families out of every problem they might possibly face" said Freida.
"I am truly inspired by the determination and courage of the girls I have met in the places I have visited in Ethiopia," she added.
The actress, known for her role as Latika in Danny Boyle's 2008 Oscar-winning film Slumdog Millionaire, stayed there for three days and visited the projects that have been undertaken in different areas, including Addis Ababa as well as in Shebedino District, Leko City of the Southern Nations, Nationalities and Peoples Region (SNNPR).
Freida was impressed by Plan Ethiopia's efforts in bringing a lasting change to the lives of children in the country.
She also visited schools where she interacted with students and teachers as well as discussed the programs and projects that are undertaken by women in the society with the support of Plan Ethiopia, where she met young and adults who are involved in so many projects.
The actress envisions starting a kind of gender sensitisation program in Ethiopia to introduce ways of protecting children, girls through knowledge and skills and to have safe and quality learning environments. Because she says, gender sensitisation programs do not only need to be given at schools, but also at homes which makes it easier to start creating awareness since it is a program protecting girls as well as children.
Born in October 18, 1984, to a Mangalorean Catholic family, it was her greatest desire to address issues that have not been given attentions to. She was involved in children's choirs, and groups helping children from non-well to do families and so on.
She was the only Indian actress to join tennis stars Andre Agassi and Steffi Graf in support of their humanitarian organisation - Agassi Foundation, in their annual fund raiser titled, the '15th Grand Slam for Children', aimed at raising funds for the education of under-privileged children.
In 2013, Freida appeared in a video clip for Gucci's Chime for Change campaign to raise funds and awareness of women's issues in terms of education, health and justice. In April 2013, the actress collaborated with UN Secretary-General Ban Ki-Moon, and World Bank president Jim Yong Kim for the Call to Action-Girl Raising Campaign representing Plan.
It is her interest in supporting children as well as girls that made her the ambassador since July 2012. She voices, advocates, and lobbies about girls concerns on international forums.
"She is committed to support Plan Ethiopia by fundraising and by globally announcing its achievements," said Amanuel Teferi, communication and marketing head at Plan Ethiopia.
Indian actor Anil Kapoor, who also starred in Slumdog Millionaire, is an ambassador for Plan India. He donated his entire fee from the movie to the NGOs universal Birth Registration campaign.
Dev Patel, who also acted in Slumdog Millionaire, was also part of the Plan's fundraising work, where over 2,000 pounds were collected in Mumbai.
Established in 1937, Plan is a child-centered community development organisation. It works in a total of 69 countries. It has been working sin Ethiopia since 1995 in Addis Ababa, Oromia Regional State, Amhara Regional State, and SNNPR.