Freida Pinto Says No Bollywood Film On The Cards For Now

Freida Pinto is excited about her upcoming mini-series with Idris Elba. 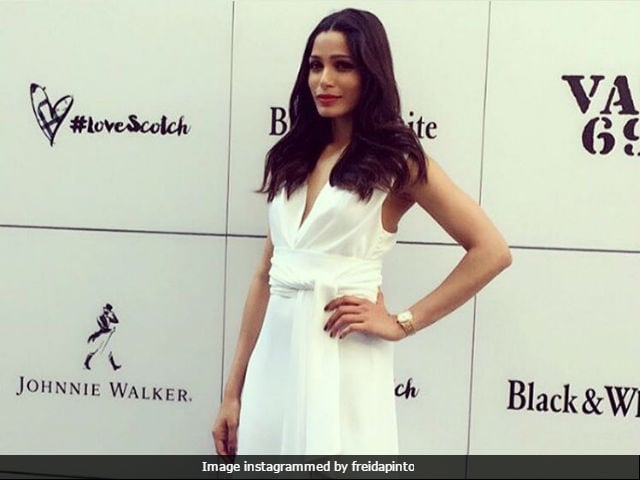 Actress Freida Pinto, who became a household name after starring in 2008 drama film Slumdog Millionaire, told news agency PTI that she is excited about her upcoming international projects but she has no plans to make her Bollywood debut yet. The 32-year-old actress, who is excited for her upcoming mini-series with Idris Elba, said: "I am very excited for April. I have a mini-series that's coming out on Showtime, I don't know on what channel it'll be coming out in India but I super excited about it. It's very topical." The Day of the Falcon actress further added: "When Bollywood happens, it will happen. You guys will be interviewing me then, whenever it will happen."
Freida Pinto, who is in India to celebrate International Scotch Day, told PTI: "I do love drinking with my dad but the person I enjoy with more is my sister. Because we get into these talks about whose Scotch is better. She naturally veers towards something which is more smoky, while I prefer the sweeter, mellow flavour." The actress will take a flight back home on February 12.
Freida Pinto's performance in Danny Boyle's film Slumdog Millionaire was widely appreciated. The film won her Screen Actors Guild Award for Outstanding Performance by a Cast in a Motion Picture and Breakthrough Performance Award at Palm Springs International Film Festival.
Freida was last seen in 2015 Hollywood movie Blunt Force Trauma, which also featured Ryan Kwanten and Mickey Rourke in the lead roles. She is currently busy working on Andy Serkis' Jungle Book, in which she'll be portraying the role of Mowgli's adoptive mother. The film is based on Rudyard Kipling's The Jungle Book and is scheduled to release next year.
(With PTI inputs)