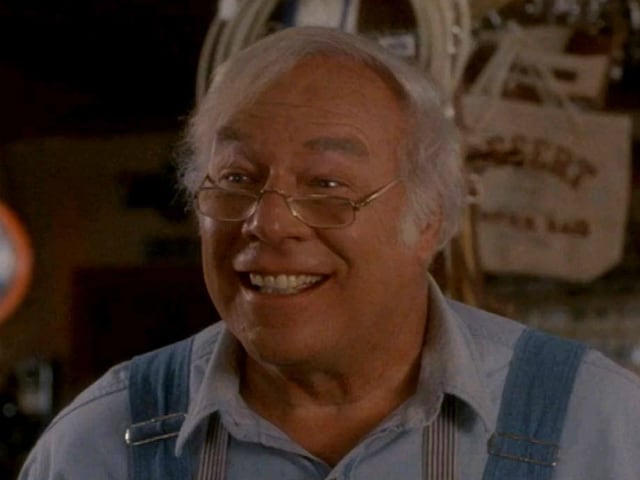 George Kennedy in a still from Creepshow 2.

George Kennedy, the Oscar-winning star of Cool Hand Luke and the Naked Gun comedy movies, has died at the age of 91, his family announced.
The burly American actor, renowned for his tough guy roles before playing against type later in his career, died on Sunday morning in Boise, Idaho, grandson Cory Schenkel said on his Facebook page.
"I have travelled on many business trips and movie shoots with my grandpa. I have created so many great memories and I will enjoy them for life," he said.
"While I am extremely sad that they are both gone - my grandma (on) September 14 and my grandpa this morning - I am grateful for the life, memories and knowledge they shared with me."
Local newspaper, the Idaho Statesman reported that the six-foot, four-inch (1.93-meter) actor had died of natural causes, citing Canyon County Coroner Vicki DeGeus-Morris.
"He had a history of heart problems," it quoted her as saying.
Mr Kennedy often played second billing to the likes of Frank Sinatra, Cary Grant, Gregory Peck, James Stewart, Robert Mitchum and, on several occasions, Clint Eastwood.
He won an Oscar for Best Supporting Actor as a sadistic chain gang prisoner in 1968 for Cool Hand Luke and starred in more than 200 films and TV series, including disaster movies Airport 1975 and Earthquake, and long-running soap opera Dallas.
He was best known in his later career for playing bumbling police captain Ed Hocken in The Naked Gun spoof cop series, from 1988 to 1994.
Fellow actor and comedian Albert Brooks, who was Oscar-nominated for The Shipping News led the online tributes. He tweeted:

The Hollywood Chamber of Commerce said flowers would be placed on his star on the Walk of Fame.