Getting Dumber? Jim Carrey Shaves Off a Female Fan's Head on TV Show 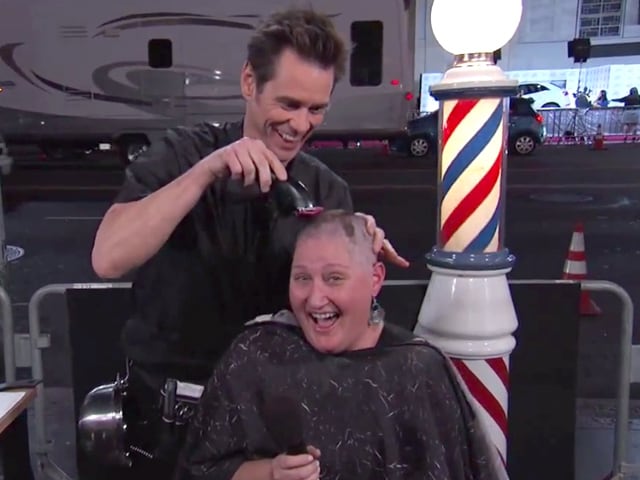 Actor Jim Carrey shaved a woman's head instead of giving her a Dumb And Dumber signature bowl cut hair-do during an appearance on TV show Jimmy Kimmel Live.
The actor went a little too far with scissors while giving his fans the signature haircut of his character Lloyd Christmas from the movie on Thursday, reports dailymail.co.uk
The actor was there to promote the sequel Dumb And Dumber To.
The woman named Deanna seemed clueless to how far the comedian was going to go with the haircut as she looked shocked with how much he actually snipped off during his first go with the scissors.
He threw up his fan's long blonde locks in the air before frantically chopping off even more of her hair as Deanna asked, "Where is the bowl? I feel more comfortable with a bowl".
The show cut away from Mr Carrey for commercial break as he worked on the fan's hair only to return minutes later with her blonde locks almost shaved completely off with a few patches up top.
Watch: