From pop icons Beyonce, to Lady Gaga, and a cheeky Madonna, to a goth-looking Taylor Swift, and almost unrecognizably intergalactic Katy Perry, it was the most glamorous night of the year in a city that likes to dress up 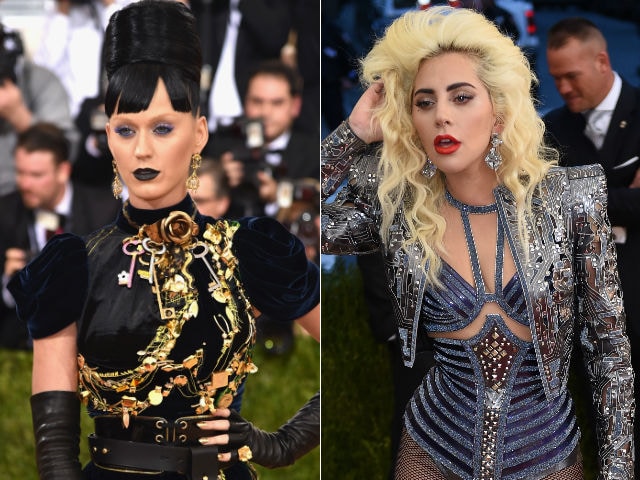 Hollywood stars, music moguls and fashion models strutted tech-inspired glam at the Met Gala Monday, working their friend-of-fashion poses on the giant staircase of the "Oscars of the East."
From pop icons Beyonce, to Lady Gaga, and a cheeky Madonna, to a goth-looking Taylor Swift, and almost unrecognizably intergalactic Katy Perry, it was the most glamorous night of the year in a city that likes to dress up.
Supermodel Gigi Hadid posed with pop star significant other Zayn Malik, who wore a metallic arm contraption.
Hollywood heavy hitters Orlando Bloom, Johnny Depp and Bradley Cooper, also turned out looking more old-school than sci-fi.
Hosted by American Vogue's editor-in-chief Anna Wintour, the benefit brought out stars of film, television, fashion, politics and sports: from Lupita Nyong'o with a towering hairdo, to Kim Kardashian posing away in a metallic outfit that looked ready for NASA.
In line with the technology theme, there was an abundance of black and metallics, cut outs, thigh-high boots and a few people in princess dresses who did not know there was a theme.
The gala, held the first Sunday in May, raises money for the Met's Costume Institute. It picks out a theme each year and attendees are encouraged to embrace it and run with it.
This year, the theme was "Manus X Machina: Fashion in an Age of Technology," which is also the title of the Costume Institute's big annual exhibition opening May 5.
"Fashion and technology are inextricably connected, more so now than ever before," said Thomas Campbell, director and CEO of the Met.
"It is therefore timely to examine the roles that the handmade and the machine-made have played in the creative process. Often presented as oppositional, this exhibition proposes a new view in which the hand and the machine are mutual and equal protagonists," he added.
- About 600 guests -
Fashion fan actresses Zoe Sandana and Blake Lively were among those sweeping up the staircase to the gala; the event costs 30,000 dollars a ticket, or 275,000 dollars for a whole table.
After dinner, there was dancing with guests such as designers Alexander Wang, Joseph Altuzarra, Tory Burch, Christopher Bailey, Marc Jacobs and Prabal Gurung.
Then there was Oscar-winner Nicole Kidman, Emma Stone, Dakota Fanning, Kate Hudson - as well as Monaco's Princess Charlotte Casiraghi beside actor-musician Jared Leto.
Actresses Mindy Kaling, Kerry Washington, Lena Dunham and Sarah Jessica Parker went for black or white; and models Naomi Campbell, Karlie Kloss, Bella Hadid and Gigi Hadid, Kendall and Kylie Jenner, all took time to wow the crowd.
Singers Bette Midler and Nicki Minaj both went for almost sci-fi black.
After the red carpet, the press is sent packing to keep a hint of mystery alive. Guests are asked not to post anything on social networks.
Honorary presidents of the gala this year were Karl Lagerfeld, the creative director of Chanel, the Italian designer Miuccia Prada and Nicolas Ghesquiere, creative director of Louis Vuitton. The co-chairs were the actor Idris Elba, the chief designer Jonathan Ive of Apple, and singer Taylor Swift.