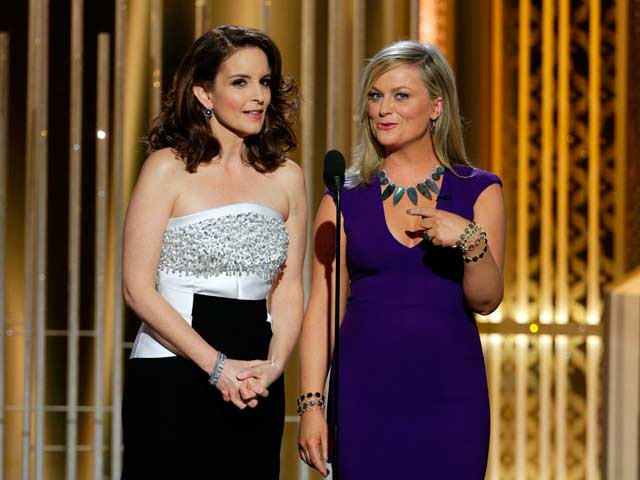 Leave it to Tina Fey and Amy Poehler to turn some of Hollywood's sorest subjects into punch lines.

Leave it to Tina Fey and Amy Poehler to turn some of Hollywood's sorest subjects into punch lines.
At the Golden Globe Awards, the comedians turned serious stories such as the hacking of Sony Pictures and sexual abuse allegations against Bill Cosby into jokes. The hostesses used their affable style and breezy comedic timing to address the topics in the opening moments of an awards show known for its boozy outbursts.
"Tonight we celebrate all the great television shows that we know and love as well as all the movies that North Korea was OK with," Tina quipped in reference to the Sony hack that US authorities have attributed to North Korea. The hacking led to the release of a wealth of private information about the studio and scuttled the wide release of the Seth Rogen and James Franco film, The Interview.
Tina also jabbed the film, which North Korea said it considered an act of war, by saying that was "not the worst review the film got" either.
Tina and Amy kept up the jabs at the reclusive nation later on during the festivities, introducing a stern-looking woman dressed in military regalia who they said was the newest member of the group that awards the Globes, the Hollywood Foreign Press Association. The woman clutched a copy of a magazine bearing an image of North Korea leader Kim Jong Un and snapped a photo with Meryl Streep. She reappeared later in the show to "criticize" the ceremony before marching off stage in high-step.
"We got a lot of weird emails that can't get out," the women jokingly told Ms Streep to get her to pose for the photo.
Allegations that Bill Cosby drugged and sexually abused several women weren't off limits.
Amy turned the traditional introduction of notable films that is standard in many awards shows as an opportunity to jab Cosby, who is accused of drugging and raping more than 15 women. Bill Cosby has denied many of the claims, but has also joked about the allegations during a recent show in Canada.
"In Into the Woods Cinderella runs from her prince, Rapunzel is thrown from her tower for her prince and Sleeping Beauty just thought that she was getting coffee with Bill Cosby," Amy said during the Globes' introduction.
Topics that couldn't be addressed with humor were handled with messages of solidarity.
On the red carpet and during the show, stars referenced the Paris terror attack that targeted the satirical newspaper Charlie Hebdo.
George Clooney, the recipient of the Cecil B DeMille Award, wore a "Je Suis Charlie" pin, while Helen Mirren held up a sign with the same slogan on it. Actor-singer Jared Leto used the phrase before presenting an award, and Amy Adams expressed her condolences to the people of France while being interviewed backstage.
Common, who won an award for original song for Glory used in the civil rights picture Selma, referenced strained race relations in the United States and how his work on the film changed him.
"I realized I am the hopeful black woman who was denied her right to vote," Common said. "I am the caring white supporter killed on the front lines of freedom. I am the unarmed black kid who maybe needed a hand, but instead was given a bullet. I am the two fallen police officers murdered in the line of duty. Selma has awaken my humanity."
One story involving Hollywood's elite that remained off limits through the show's first hour - the posting online of nude images of numerous female stars, including Oscar-winner Jennifer Lawrence.
A few of the stars may have been on edge when Ricky Gervais - a three-time Globes host who skewers both the show and Hollywood's elite - took the stage to present an award.
Gervais behaved... for the most part.
"I'm not going to start picking on things you've done," he told his fellow actors. "Some of it immoral. A lot of it illegal. If we've learned one thing, it's that famous people are above the law. As it should be."