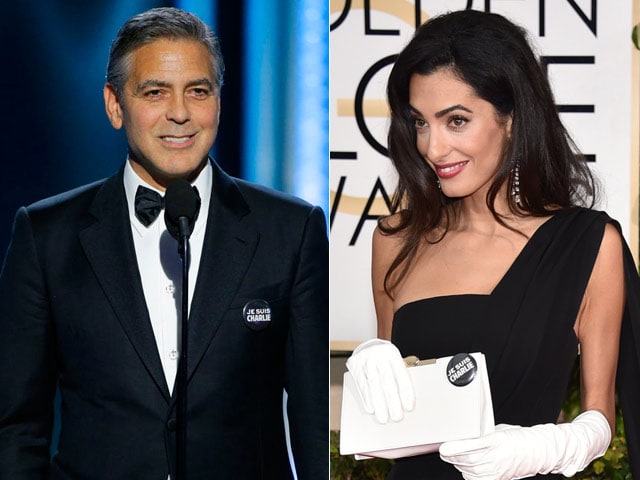 George Clooney and his wife Amal with their pinned "Je Suis Charlie" buttons at the Golden Globes. (Image courtesy: AP)

George Clooney, the recipient of this year's Cecil B DeMille lifetime achievement award, wore a "Je Suis Charlie" pin on his tuxedo

From George Clooney to Helen Mirren and Jared Leto - Hollywood celebrities at the 72nd Golden Globe award ceremony expressed their solidarity with the victims of the French magazine Charlie Hebdo in an attack by two gunmen in Paris.

At the red carpet of the gala, held at The Beverly Hilton hotel here, Mirren, Diane Kruger, Joshua Jackson and Kathy Bates also showed off "Je Suis Charlie" signage, while French composer Alexandre Desplat, nominated for his The Imitation Game score, also brought a copy of the sign, reported variety.com.

"Je Suis Charlie," French for "I Am Charlie," is the slogan adopted by supporters of press freedom around the world and the French version has fast become one of the most-used hashtags ever on Twitter.

The tributes continued during the ceremony.

Hollywood Foreign Press Association president Theo Kingma received a standing ovation when he took the stage, calling for freedom of speech around the world.

"Our thoughts, our prayers, our hearts are with you tonight," he said addressing Charlie Hebdo.

Later, Mr Clooney also paid tribute to the victims of the attack, in which the offices of the satirical magazine were attacked by two brothers - Cherif and Said Kouachi - on January 7, killing 12 people, including the chief editor.

"Today was an extraordinary day, there were millions of people who marched not just in Paris but around the world, and they were Christians and Jews and Muslims, they were leaders of countries all over the world and they didn't march in protest. They marched in support of the idea that we will not walk in fear. So Je suis Charlie," Mr Clooney said.