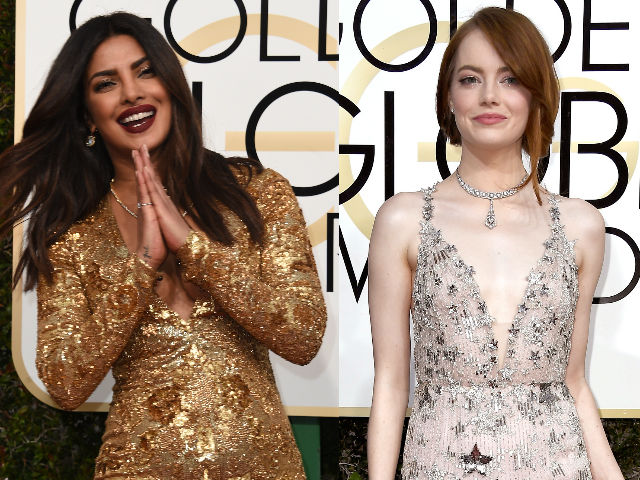 Hollywood A-listers basked in the evening sun as they strode up the red carpet in Los Angeles for Sunday's Golden Globes ceremony. Here are a few key takeaways from the first major fashion parade of one of Hollywood's biggest award galas. Pink was definitely one of the colours of the night with stars like La La Land actress Emma Stone, Rogue One's Felicity Jones, Zoe Saldana and Rules Don't Apply actress Lily Collins opting for the colour. Emma Stone won Best Actress for La La Land. Actress Natalie Portman walked the red carpet in a bright yellow Prada ensemble, which showed her baby bump.
- Pretty in pink -
Emma Stone, who opted for a pale pink Valentino gown, was accompanied by her brother. Felicity Jones and Zoe Saldana zeroed in pink Gucci: The Rogue One star looked lovely in a pastel gown with black and silver detailing while Zoe Saldana chose a ruffled two-tone frock with a sweet bow at the waist. Angela Bassett, a star of FX's anthology series American Horror Story chose a strappy rose Christian Siriano gown with a ruffled neckline. Lily Collins, who was nominated for her work on Warren Beatty's Rules Don't Apply, looked like a princess in a lace floor-sweeping Zuhair Murad gown with cap sleeves. 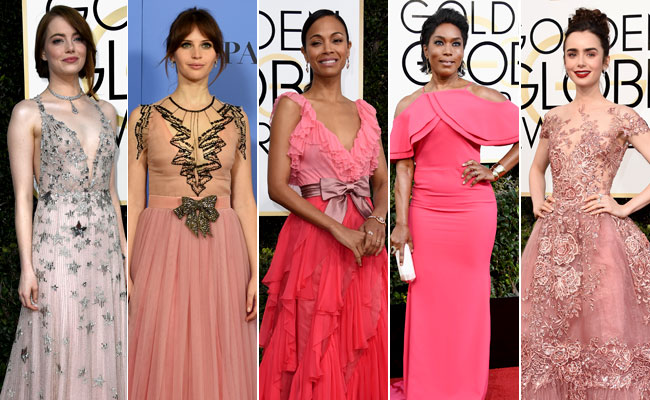 Pink was definitely one of the favourite colours of the night (courtesy: AFP)

- Pops of colour -
Between effortless chic black gowns and stunning white dresses, bright colours and metallic hues also cropped up on the Golden Globes red carpet. Quantico actress Priyanka Chopra walked the red carpet in a gold ensemble from the shelves of Ralph Lauren. Priyanka accessorised with a pendant. Natalie Portman was glowing as she arrived in a Prada gown with an empire waist and jewelled details on the cuffs. Sleek hair and dangling diamond chandelier earrings completed the look, which was reminiscent of the former first lady's fashion statement. "It was a great opportunity and challenge to get to play her," she told E! network on the red carpet. Jessica Chastain, nominated in the same category for gun lobby drama Miss Sloane, opted for the same designer - her ensemble was with floral motifs. 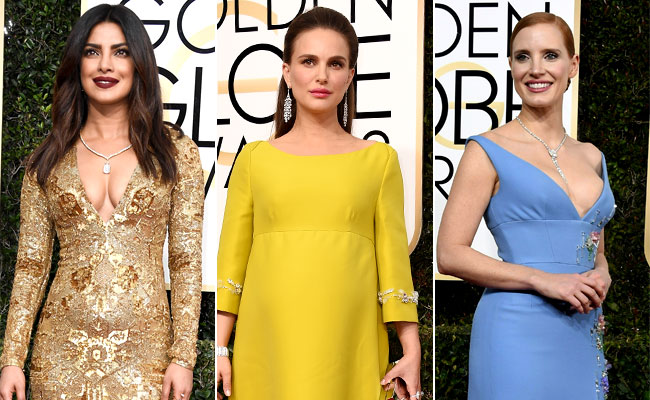 - Ladies wear the pants too -
A few of Hollywood's top stars showed that the red carpet is not about just gowns. Evan Rachel Wood, a best actress nominee in the television drama category for HBO's sci-fi western Westworld, rocked a tuxedo from Altuzarra, saying she wanted young girls to know that dresses were not "a requirement." Octavia Spencer, up for a best supporting actress award for her work on Hidden Figures, the story of three black women mathematicians who helped NASA launch some of its first space missions, was elegant in a Laura Basci tuxedo. "I was actually pretty good at math. Once I got to calculus, I just stopped," Ms Spencer said with a laugh about her own studies. American Crime nominee Felicity Huffman, who sported a sleeveless Georges Chakra jumpsuit with a gold and silver bodice and white trousers, said she wore it in honour of Democratic presidential candidate Hillary Clinton. 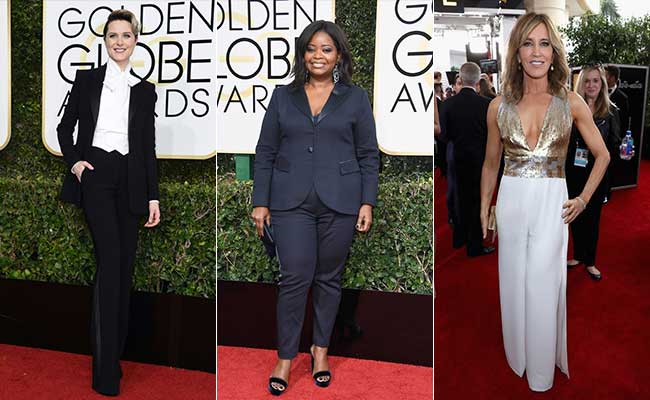 - Basic black never gets old -
Amy Adams, who was nominated for best actress in a drama for her performance in sci-fi Arrival, glittered in a sequined black column dress from Tom Ford, who happened to direct her in psychological thriller Nocturnal Animals. A sleek hairdo and dangling statement earrings finished the look. Kristen Bell, a star of NBC comedy The Good Place was stunning in a Jenny Packham gown. Winona Ryder, a nominee for best actress in a television drama for her work on breakout Netflix sci-fi drama Stranger Things, oozed classic Hollywood glamour in a strapless black Viktor and Rolf gown. 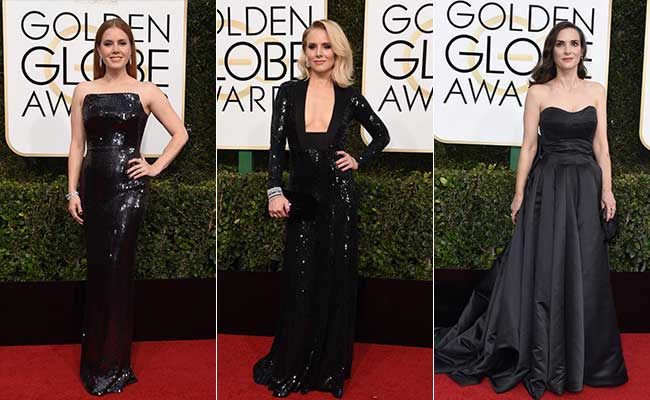 Black will always hold its place on the red carpet (courtesy: AFP)

The Golden Globe Awards were held at the Beverly Hilton in Los Angeles on Sunday evening (early Monday morning for India).