Golden Globes 2017: Meryl Streep Is Twitter's Heroine And Everyone Loves Her

Golden Globes 2017: Meryl Streep launched a scathing attack on the President-Elect of USA without once naming him 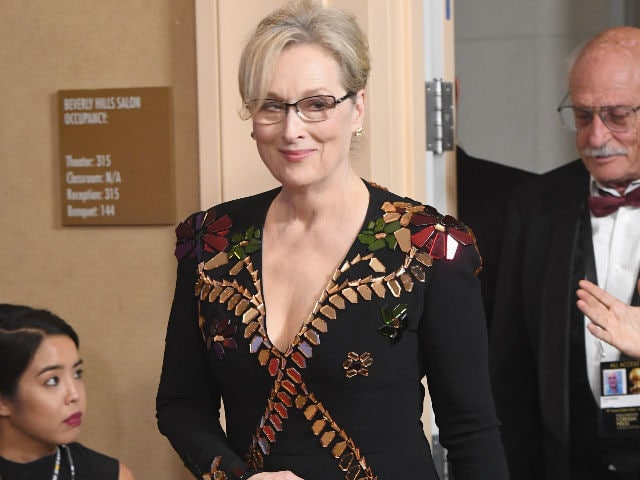 Actress Meryl Streep's impassioned and emotional speech at the Golden Globes has won the Internet's collective and somewhat spiky heart. In a cleverly-crafted takedown of Donald Trump's political agenda, Ms Streep launched a scathing attack on the President-Elect of USA without once naming him. Her powerful words slammed Mr Trump's xenophobic campaign platform and called for protection of journalistic principles and free speech. Ms Streep, who was accepting the Cecil B DeMille award at the Golden Globes, invoked the diverse background of many of the actors present in the room and reminded the world that there would be only "football and mixed martial arts to watch" were Hollywood's 'outsiders' to be 'thrown out.' "When the powerful use their position to bully others, we all lose," said Ms Streep on Sunday night. Her speech, which has since gone viral, has been given a blockbuster welcome on Twitter by Indian and international celebrities.
Here are some reactions from Bollywood and Hollywood:


Quoting my favourite #MerylStreep, as I call an end to this night...when u have a broken heart..make art. You are astounding.#fangirlpic.twitter.com/i82HSswAgG

"We have to remind each other of the privilege & the responsibility of the act of empathy"....#MerylStreep#WordsToLiveByhttps://t.co/qurjT1QcaU

Let's copy their grace,their guts, not their films. #Merylstreep the real true hero, the star. #GoldenGlobeshttps://t.co/akiyIDjeYP

All hail the queen ..when #MerylStreep talks.. #Hollywood the #foreigners the #press and the world shuts up and listens!!! #GoldenGlobes

always admired Meryl Streep as an actor but now my respect for her as a person knows no end . What a fearless speech at the golden globe !!

Take your broken heart make it into Art ! Wow #MerylStreephttps://t.co/3oRn3ARlPv

We in our film industry don't even need to give a speech like Meryl Streep if we just start standing up with those who actually speak up.

#MerylStreep tonight thank you for defending us and "take your broken heart, make it into art"

There has never been anyone like Meryl Streep. I love her. #GoldenGlobes

How DARE Meryl exercise her right to free speech like that's a thing we are allowed to do here in Ameri- wait...hmm. #MerylStreep

"When the powerful use their position to bully others, we all lose" thank you #MerylStreep#GoldenGlobes

I started my career working with #MerylStreep. That experience set a standard to which I always aspired. A national treasure and fine woman.

#MerylStreep your work, your words.. & your heart is why you are the history lesson our young generation should aspire to be. #GoldenGlobes

'You're perfect, and I love you.' Everyone ever, right now. #MerylStreep#GoldenGlobes

Clearly, East or West, Meryl Streep is the best.
Here are excerpts from Meryl Streep's Golden Globe Awards Speech:
"Hollywood is crawling with outsiders and foreigners. And if we kick them all out, you'll have nothing to watch but football and mixed martial arts, which are not the arts."
"It was that moment when the person asking to sit in the most respected seat in our country imitated a disabled reporter. Someone he outranked in privilege, power, and the capacity to fight back. It kind of broke my heart when I saw it. I still can't get it out of my head because it wasn't in a movie. It was real life."
"And this instinct to humiliate, when it's modeled by someone in the public platform, by someone powerful, it filters down into everybody's life, 'cause it kind of gives permission for other people to do the same thing. Disrespect invites disrespect. Violence incites violence. And when the powerful use their position to bully others, we all lose."
Watch Meryl Streep's Golden Globe Awards Speech

Meryl Streep, a multiple Golden Globe winner, was nominated this year in the Best Actress - Comedy/Musical category for her performance in Florence Foster Jenkins. She lost to Emma Stone for La La Land.