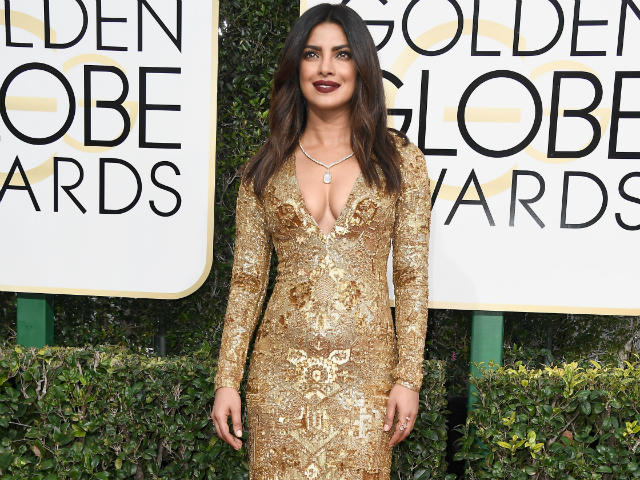 Actress Priyanka Chopra, making her Golden Globes debut, co-presented one of the early awards at the ceremony held at the Beverly Hilton in Los Angeles on Sunday evening (early Monday morning for India). This is the start of the international awards season and the 34-year-old actress was invited to present one of the prizes in the television category in her capacity as headline star of American network show Quantico. Priyanka, who turned heads on the red carpet with stars like Emma Stone, Natalie Portman and Blake Lively, co-presented the evening's second award with The Walking Dead star Jeffrey Dean Morgan. They gave away the award for Best TV Actor - Drama, won by Billy Bob Thornton for Goliath. This is the third time Priyanka Chopra is a presenter at a major international award show after being invited on the Oscars and the Emmys last year. Priyanka plays the lead role of FBI-turned-CIA agent Alex Parrish in Quantico, now in its second season.


.@priyankachopra and @JDMorgan take the stage to present the next award! #GoldenGlobespic.twitter.com/15TueiW4gx

Priyanka Chopra picked gold to wear on the Golden Globes red carpet, shimmering in a metallic Ralph Lauren dress accessorised with a pendant. The Zuhair Murad dress Priyanka wore to the Oscars last year made it to Google's 2016 in review list. No doubt she will make it to the best-dressed roster this year. 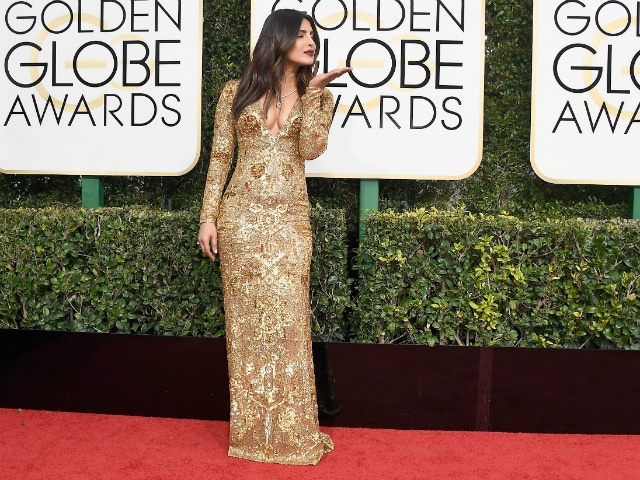 There was incessant popping of flashbulbs when Priyanka walked on the red carpet at the Golden Globes. This is how she made heads turn: 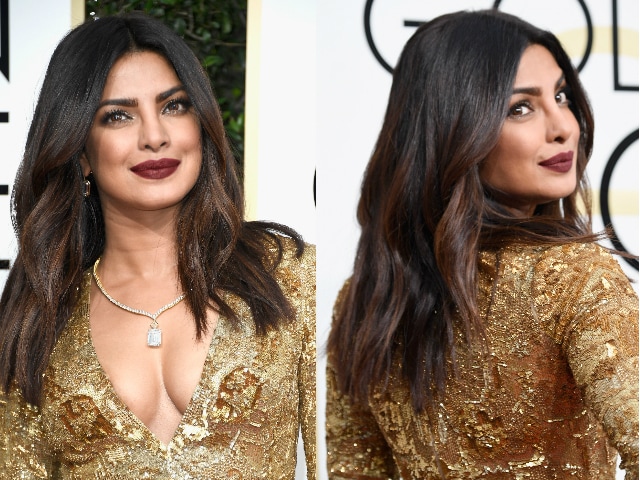 Meanwhile, Priyanka is all set to make her Hollywood debut with the Baywatch movie. Baywatch features Priyanka as the main villain Victoria Leeds and also stars Dwayne Johnson. This is how Priyanka 'represented' the 'bad guys' at the Golden Globes:


The bad guys do have all the fun. Representing #Baywatch at the #GoldenGlobes! pic.twitter.com/DltGl6eiW9

Barely a month ago, Priyanka Chopra trended on social media after it was announced she would be presenting at the Golden Globes alongside the who's who of Hollywood like Nicole Kidman, Chris Pine, Eddie Redmayne, Drew Barrymore, Matt Damon, Viola Davis, Justin Theroux and Zoe Saldana. The actress was holidaying in Goa shortly before flying out to Los Angeles.
That may have been why she confessed, just two day ahead of the awards, that she was struggling with a dress dilemma:

Priyanka spent the last month at home in India and now she has a rather packed schedule to follow. Priyanka will be busy shooting the remaining portions of Quantico season 2. She will also be prepping for her second People's Choice Awards, where she is a nominee. She won an award for her performance as Alex Parrish last year. Priyanka will also be prepping for the release of her Hollywood debut - the Baywatch movie. Priyanka's Baywatch releases on May 26.
Back home, Priyanka Chopra was last seen in Prakash Jha's Jai Gangaajal and has revealed she will sign two Hindi films this year.