Golden Globes: Glamour, Bling and Cleavage on the Red Carpet 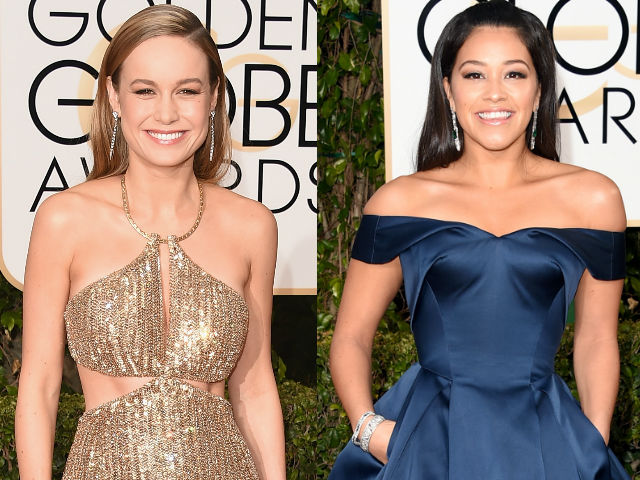 Hollywood's top stars looked glamorous on Sunday as they hit the Golden Globes red carpet in plenty of bling and sequins - and with lots of attitude.
Here are a few key takeaways from the A-list fashion parade:
STRAPLESS GLAMOUR
Gina Rodriguez, who won a Globe last year for best actress in a comedy series for Jane the Virgin and was a nominee again this year, sizzled in a strapless sapphire blue Zac Posen gown, and had a quality accessory on her arm: her father. (Also Read: Golden Globes Red Carpet Report: The Good, the Bad and the Plain Ugly)
Downton Abbey star Joanne Froggatt, nominated for her supporting role on the wildly popular television series, meanwhile chose a pale blue Reem Acra gown with a daring neckline.
Comedian Amy Schumer sported a black and white Prabal Gurung gown with pockets - certainly not a fashion Trainwreck, the name of her hit film, which was nominated for Best Film (Comedy or Musical).
And pop diva Lady Gaga, a winner for her role in fright fest American Horror Story: Hotel, channeled Marilyn Monroe in a form-fitting black Versace gown, her platinum hair swept into a very Marilyn-esque style. (In Pics: The 10 Best Dressed Stars at the Golden Globes) 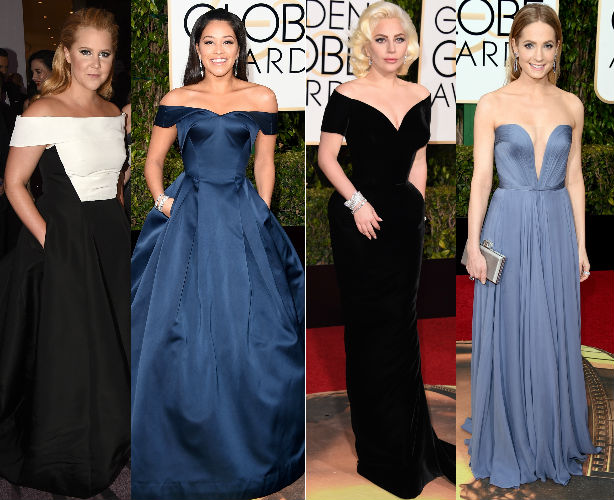 Image courtesy: AFP
THE BLING RING
Brie Larson, who took home the prize for Best Actress in a Motion Picture Drama for her searing portrayal of a woman in captivity in Room, stunned in a gold sequined halter gown from Calvin Klein, with cutouts at the waist.
Julianne Moore glittered from head to toe in a deep blue sequined gown by Tom Ford -- and had Ford on her arm. Image courtesy: AFP
CLEAVAGE - LOTS OF IT
Viola Davis, an Emmy winner and a Globes nominee for her portrayal of law school professor Annalise Keating in ABC's How to Get Away with Murder, left little to the imagination in her Marchesa navy blue frock with sheer sleeves, all encrusted with silver accents.
Pop star Katy Perry also dared in a plunging Prada gown in this year's Pantone color of the year, rose quartz.
And Jaimie Alexander, the star of NBC hit drama Blindspot and a presenter at the ceremony, wowed fashionistas in her emerald and black Genny gown, which featured geometric patterns - and a deep wide neckline. 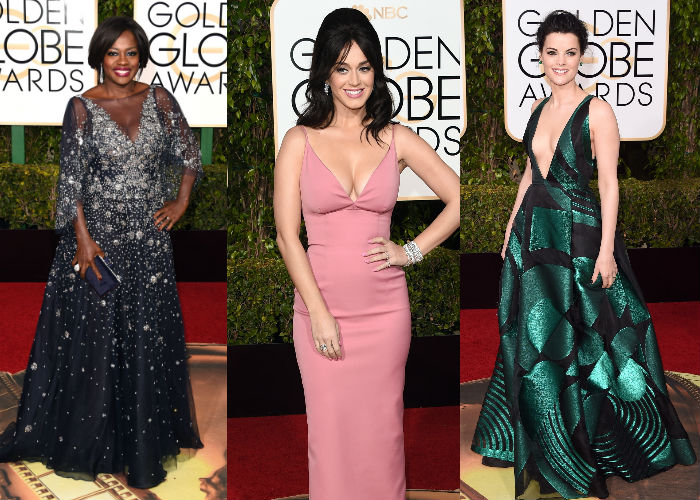 Image courtesy: AFP
(SOMEWHAT) DEMURE LOOKS
Alicia Vikander, a double nominee for her work in The Danish Girl and Ex Machina, looked ethereal in a pleated white goddess gown from Louis Vuitton with a sweet ruffled neckline - and a nearly bare back.
Jennifer Lawrence, a winner for Best Actress (Comedy or Musical) for Joy, dressed to impress with a structured red column gown from Dior that offered glimpses of skin thanks to side cutouts.
Jennifer Lopez's bright yellow gown by Giambattista Valli featured a thigh-high slit, revealing her fiercely toned legs. But the dress featured a capelet, covering most everything else, and was finished off with a snaking diamond necklace.
Image courtesy: AFP