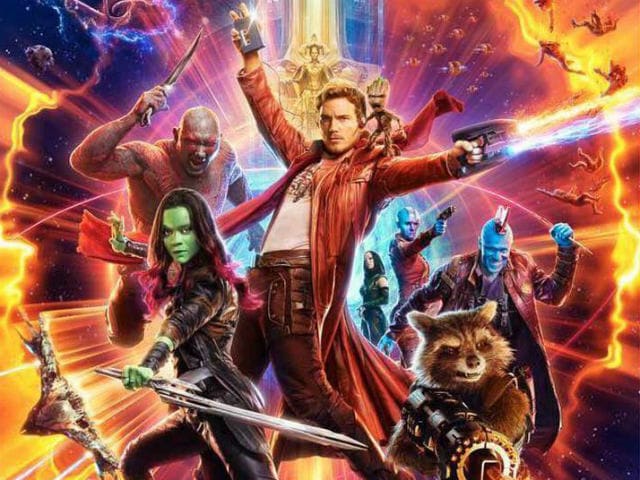 Guardians of the Galaxy 2.0: A new poster of the film

The Guardians of the Galaxy comprising Gamora, Drax, Baby Groot, Rocket, Yondu and Mantis, and headlined by Star-Lord, returned and returned with a galactic big bang in the new trailer. The Guardians are all set to battle a new set of enemies (trust me they love it), and are seen prepping for one of them at the beginning of the trailer - something that looks like a giant, teethed octopus. It crash-lands on the Guardians's sacred pad and well, there's a lot of slow-mo and battle music and action drama. Rocket sums it up in simple words: "Wow, that's intense!" Actor Bradley Cooper voices the character of Rocket, whose one-liners are something to look forward to. Here's an example: "We should really be able to jack up our prices for two-time galaxy savers."
The trailer of Guardians of the Galaxy 2.0 also holds a surprise for fans as well as the Star-Lord - he finally gets to meet his father Ego. Their first interaction is unusually funny but we are fine as long as we get to see actor Kurt Russell as Ego. Baby Groot, voiced by Vin Diesel, is particularly cute with his adorable antics.
"Sometimes, the thing you're searching for all your life is right there by your side," is the realisation that dawns upon the Star-Lord, played by Chris Patt.
Video: Watch the trailer of Guardians of the Galaxy 2.0:

Chris Patt, Zoe Saldana, Dave Bautist, Vin Diesel and Bradley Cooper reprise their roles as Peter Quill, Gamora, Drax the Destroyer, Baby Groot and Rocket. Directed by James Gunn, Guardians of the Galaxy 2.0 is scheduled to release on May 5.