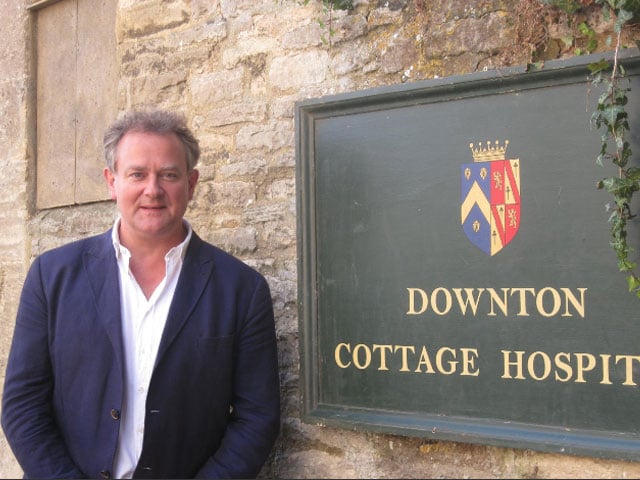 "I have met the actors, but I haven't started working with them. I am only doing scenes with Gillian as of now. Gurinder has been blown away with what they are bringing on screen. I'm really excited to work with them. I haven't done a project with an Indian cast before, so I am really excited," said Downton Abbey actor Hugh Bonneville

He has wooed audiences the world over with his portrayal of Robert Crawley, the Earl of Grantham in the hit British period TV drama series Downton Abbey. Now actor Hugh Bonneville is playing Lord Mountbatten - the last viceroy of British India - for Gurinder Chadha's upcoming film Vicerory's House. The film is currently being shot in the palatial locales of Jodhpur and Mr Bonneville says he is 'loving the experience.'
The actor, 51, told IANS in a telephonic interview from Jodhpur, "I've been enjoying the palaces and monuments in Jodhpur hugely. It's fascinating. We are filming for three and a half weeks. I'm playing Lord Mountbatten.
Gillian Anderson is playing Lady Mountbatten. It is centered on events of partition, but there is a huge heart to the film. It is an emotional story set in the kitchens and staff of the Viceroy's House - that is the principal story."
Mr Bonneville co-stars with Bollywood actors Om Puri and Huma Qureshi in the film.
Without divulging much about Om Puri's role, Hugh Bonneville asserted that 'he is a legend'.
"He is playing the father of one of our central characters. He is a legend, it has been an honour to have him," he said.
"I have met the actors, but I haven't started working with them. I am only doing scenes with Gillian as of now. Gurinder has been blown away with what they are bringing on screen. I'm really excited to work with them. I haven't done a project with an Indian cast before; so I am really excited," he added. While speaking about the film, Hugh Bonneville said it reflected 'the events that took place, the negotiations that led to the partition of India.'
He also clarified that since the movie was based on 'a delicate era of Indian history,' it did not claim to make any changes to 'any course of history.'
"The film would not make any claims to change any course of history, but it would at least put a spotlight on what has been a delicate area of Indian history, which is deeply complicated, if nothing else, but explain it to a broader audience and hopefully allow people who want to understand where we are now. Because history explains our roots," the actor stated.
"It was a painful period of recent history. It is delicately mapped out in the film. The pulse of story takes place with characters from the backstage world of the characters. The kitchen staff of the Lord and Lady is as important as the Lord and Lady of the establishment," he added.
He had high words of praise for Gurinder Chadha with whom he is working for the first time.
"The film is very delicately crafted by Chadha. She is a very fine director. Her roots are from here (India). We had the splendour of the Viceroy's House as the principal character, where all these stories are unveiled," he said.