Have You Seen Priyanka Chopra's Thanksgiving Special Video of Baywatch Yet? 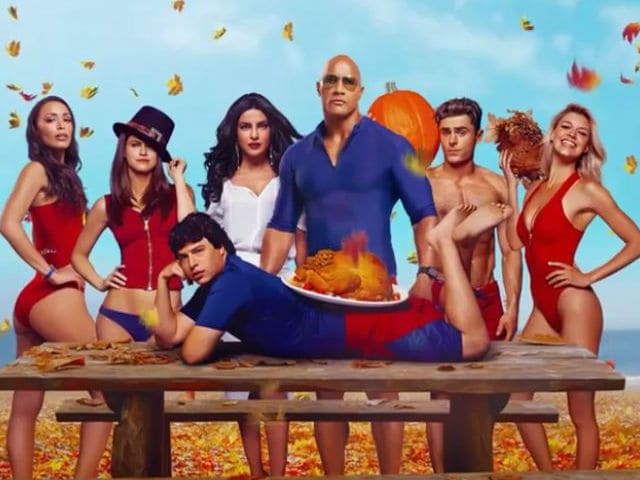 Actress Priyanka Chopra, who is currently in Los Angeles, where she's busy filming her hit American television show Quantico shared a Thanksgiving special video from her upcoming Hollywood film Baywatch in which she stars as the antagonist opposite Dwayne 'The Rock' Johnson. Priyanka joins the red swimsuit-clad life-guard gang to wish her fans Happy Thanksgiving. In her caption she said: "Many things to be grateful for, including this (Baywatch) crazy family." In the video the cast stood together, with the exception of Jon Bass, who was positioned with the turkey (traditionally served on Thanksgiving) on the table. Baywatch is also Priyanka's debut Hollywood film.
Here's the video:

Baywatch is based on the hugely popular 1990s television series which featured David Hasselhoff and Pamela Anderson in the lead. Both actors will have cameos in the film.
Of her role and character, Victoria Leeds, Priyanka told Interview Magazine: "She is extremely feminine, very evil, extremely delectable, manipulative and patronizing. Victoria is strong because she has minions. She has people to do her dirty work. She doesn't look at how to get results, she just gets them. She doesn't have morality. But also it's a comedy," adding, "It was so much fun to be able to create Victoria in Baywatch. It was awesome to bring that black evilness into their positive, beautiful world."
In a Twitter chat Priyanka said that her character is 'bombshell of a villain' but the actress also revealed that she isn't going to do a slow-mo run on the beach in the iconic red swimsuit. "I'm not a lifeguard, I'm the interruption in their slow motion," she told NDTV in an interview.

The Seth Gordon-directed film also stars Zac Efron, Kelly Rohrbach and Alexandra Daddario and is slated to release in May.
Priyanka Chopra, who has temporarily moved to USA, is busy filming the second season of Quantico, which fetched her a second People's Choice Award nomination this year. Priyanka, who ranked #8 on Forbes' list of the world's highest-paid TV actresses this year, won the award last year under Favorite Actress In A New TV Series category.
Priyanka Chopra has no stated plans to return to Bollywood any time soon but Marathi film Ventilator, which she produced. She's also announced her second film as producer, Punjabi film Sarvann.