How Mission: Impossible 5's Extreme Plane Stunt Was Made 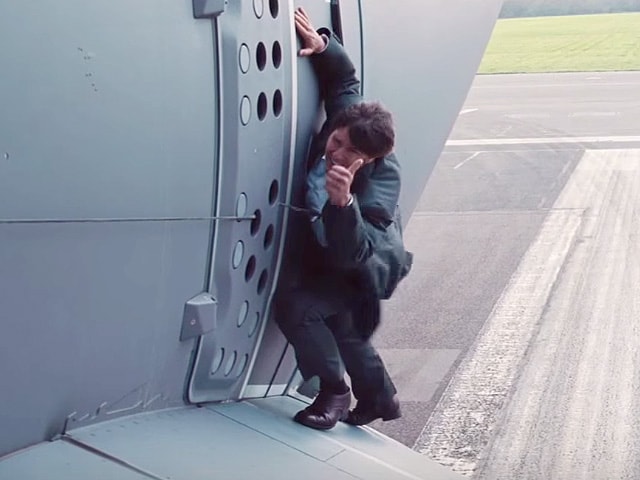 A still from the behind-the-scenes footage of Mission: Impossible 5.

In April, Tom told his CinemaCon audience at Las Vegas that he was 'scared s***less' while filming the extreme stunt. He wasn't joking

Why do the stunts in Mission: Impossible - Rogue Nation look real? Because they are real, apparently. This behind-the-scenes look at Tom Cruise's most edge-of-the-seat stunt yet shows you just how a Hollywood studio took a 'multi-million star and (hung) him outside a plane' and had him live to tell the tale. "I couldn't sleep the night before," the 53-year-old actor says, and we're not doubting that for a moment.
In April, Tom told his CinemaCon audience at Las Vegas that he was 'scared s***less' while filming the extreme stunt. He wasn't joking. In the video below, he looks absolutely terrified.

As it turns out, this Mission wasn't Impossible. Here, among a clutch of other high-octane shenanigans co-starring Simon Pegg, Rebecca Ferguson and the bike scene that never fails to make an appearance in a Tom Cruise film, is the plane and him. (Also Read: Mission: Impossible 5's Stunning VFX and the Indians Behind Them )

Mission: Imposssible - Rouge Nation, which released in the US on July 31, will hit Indian screens on August 6.