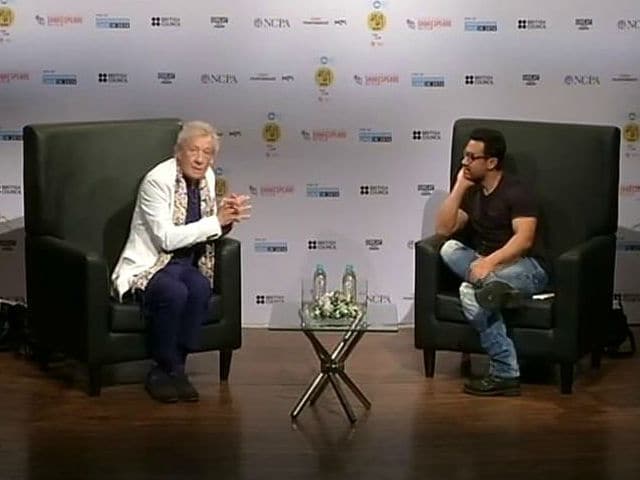 Sir Ian in conversation with Aamir Khan in Mumbai.

Monday isn't normally this special. This week began with Sir Ian McKellen visiting Mumbai and, specifically, chatting with Aamir Khan about everything from Shakespeare to being homosexual. Sir Ian is now beloved across generations as Gandalf from the Lord of the Rings films and the older Magneto from the X-Men franchise. But the 76-year-old actor built his career playing Shakespeare on stage - particularly lauded were his performances as Richard III, Macbeth and Iago.
Aamir, 50, also has a Shakespeare connect - his breakout film Qayamat Se Qayamt Tak was based on Romeo and Juliet.
Here are five big quotes from Sir Ian McKellen from Monday's masterclass:
On his sexuality
Being a gay man at a time when it was against the law, it did inhibit me. When I had a love scene with a girl - if it had been with a boy I would have been fine.
On Section 377
Presumably they had to pass it because there was so much homosexuality around. I've seen the statues!
On Romeo and Juliet
We've all fallen in love and probably with the wrong person. Juliet's father was trying to organise an arranged marriage. (To audience) You know what that means.
On how Shakespeare handles politics
Shakespeare shows that the Kings, the Presidents, the powerful are frail. He shows us that they should be challenged and questioned
On India
First thing I heard of India was 1947. We celebrated in our house. Gandhi was revered. Second thing I knew was Shakespeare-wallahs.