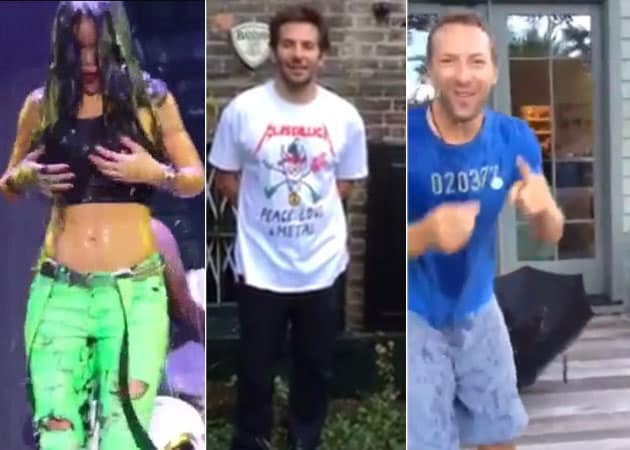 The ALS (Amyotrophic Lateral Sclerosis) Ice Bucket Challenge has snowballed into a huge phenomenon across America with Hollywood stars doing their bit to promote the cause. The recent celebrities from Hollywood to lend their star power to the endeavour include, Rihanna, Eminem, Bradley Cooper, Chris Martin, Gwyneth Paltrow, Kylie Minogue, Justin Theroux and Kate Moss. (Also Read: No Stopping the Ice Bucket Challenge: Tom Cruise, Ashton Kutcher Play Tag )
Rihanna and Eminem
The hit-makers closed their Monster Tour by taking part in the challenge in front of an enthusiastic audience. Rihanna cheerfully tipped a bucket of icy water over Eminem. She was not spared either and several assistants poured a large silver bucket of chilly water over her.

Bradley Cooper
The A-list actor bravely withstood two buckets of icy cold water poured on him from a few floors above.
Post by Bradley Cooper.
Chris Martin
The Coldplay frontman accepted his estranged wife Gwyneth Paltrow's challenge and took up the task with fashion designer Stella McCartney, who also received a nomination from Gwyneth. The pair, who were quite a sport, initially pretended that they weren't going to take part in the challenge before being doused with icy water.

Gwyneth Paltrow
The actress instagrammed a picture in which she is seen taking up the challenge scantily clad in a bikini, screaming as the water hit her.

Kylie Minogue
Stunning in a black swimsuit, the singer, who was nominated by Benedict Cumberbatch, performed the feat on board a luxury yacht in Ibiza. 'That feels so good, so good, so good,' she exclaimed before jumping into the arms of designer Stefano Gabbana.

Kate Moss
The model's makeup artist Charlotte Tilbury instagrammed a video of the 40-year-old in a taking on the challenge in a black bikini.


Naomi Campbell
The supermodel also shared her ice bucket challenge video on Instagram. She took on the challenge in a novel way - lying down in a bikini on the side of a yacht.

Justin Theroux
The 43-year-old hunk was drenched with water from behind and could barely speak under the effect of the freezing water. Shortly before getting dunked, he nominated his bride-to-be Jennifer Aniston to take on the challenge.