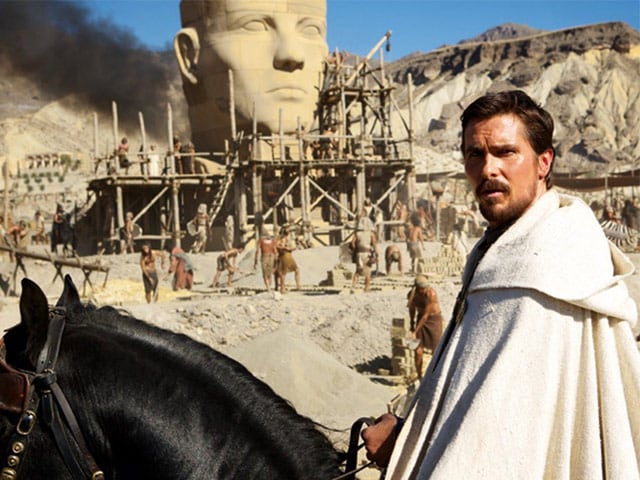 A still from the film Exodus: Gods and Kings.

Should Hollywood be concerned about casting white actors to portray people who were definitely not white?

The director inflamed calls for a boycott of the film with his comments last week that he couldn't have made such a big-budget movie if "my lead actor is Mohammad so-and-so from such-and-such."

"I'm just not going to get it financed," he told the trade paper Variety. "So the question doesn't even come up."

The question, perhaps, being: Should Hollywood be concerned about casting white actors to portray people who were definitely not white?

"It's an institutional problem," said professor Todd Boyd, chair for the Study of Race and Popular Culture at the University of Southern California. "Hollywood is a place where profit is king," he said, "and it rarely takes big-budget risks on casts of color."

"The way movies get financed, and the overall ignorance in this country about Africa, explains why you'd have a big budget film with a very well-known director backed by a well-known studio mogul and get this problematic representation in 2014," he said.

The financial argument doesn't hold up. What might make a movie successful is speculative, and those with diverse casts are just as likely to become global box-office hits. Consider the Hunger Games and Fast & Furious franchises. The latter has made more than US$2 billion worldwide.

There's a long history of such casting in Hollywood. Moses - who the Bible and historians would say came from the North African nation of Egypt - was only brown-skinned on the big screen as an animated character in 1998's The Prince of Egypt. Otherwise, Hollywood's version of the biblical hero has been white, played by actors such as Charlton Heston in 1956, and Christian Slater more than 50 years later.

Rupert Murdoch, who owns the studio that produced Exodus: Gods and Kings, defended its casting on Twitter.

"Since when are Egyptians not white?" he wrote.

He followed up with, "Of course Egyptians are Middle Eastern, but far from black. They treated blacks as slaves."

Representatives from 20th Century Fox declined comment and Mr Scott was not available for an interview for this story.

Another biblical epic, Noah, also faced criticism for its all-white cast led by Russell Crowe and Jennifer Connelly. At the time of its release earlier this year, screenwriter Ari Handel said the filmmakers opted for an Anglo cast so as to avoid calling attention to issues of race.

"They're supposed to be stand-ins for all people," he said. "Either you end up with a Bennetton ad or the crew of the Starship Enterprise."

It's not unusual for some ethnicities to play others on screen. Mexican actor Gael Garcia Bernal portrays the real Iranian journalist at the center of Rosewater and Japanese actor Ken Watanabe played the fictional Arabic villain in 2005's Batman Begins. Yet Mr Boyd notes that actors of color are rarely, if ever, cast as white figures.

For example, he said, Hollywood wouldn't make a movie about Princess Diana with Kerry Washington in the lead role. "That's basically the equivalent of what's going on, but in reverse," he said. "They would never neglect to cast a white actor as a (white) historical figure just because there were box office concerns."

As Chris Rock wrote in his recent essay in The Hollywood Reporter, Hollywood's reputation as a liberal place doesn't seem to extend to casting actors of color in leading roles.

"We're never 'in the mix,'" he said. "When there's a hot part in town and the guys are reading for it, that's just what happens. It was never like, 'Is it going to be Ryan Gosling or Chiwetel Ejiofor for Fifty Shades of Grey?"

While Will Smith and Denzel Washington are as bankable as Brad Pitt or Tom Cruise, Hollywood has been historically reluctant to cast minority stars in tent-pole leading roles. While Hercules, starring Dwayne Johnson, failed to recoup its budget earlier this year (as did The Legend of Hercules, which featured Kellan Lutz in the title role), Washington's The Equalizer was a US$190 million international hit. Kevin Hart has also proven to be box-office gold, scoring successes this year with Ride Along and Think Like A Man Too.

A recent USC study of race and ethnicity in film found that while non-Caucasians make up 44 per cent of moviegoers, they're represented less than half that much on screen. Among the 100 top-grossing films of 2012, almost 11 per cent of speaking characters were black, five per cent were Asian and just over four per cent were Hispanic. Do these statistics mean non-white stars aren't making money at the box office? Or do they reflect a lack of opportunities in big-budget projects for actors of color?

Actor and producer Harry Lennix, who appeared in last year's Man of Steel and now stars on NBC's The Blacklist, believes the casting of Exodus: Gods and Kings had everything to do with profitability.

"In their minds, they have the best shot at making the most money if they have white actors," he said.

Mr Lennix has started making his own movies - including one that features a black Jesus - and advocates for artists to create and fans to support the kind of movies they'd like to see, where quality transcends color.

"There's an untapped, underserved market of highly cultured people of color and other marginalized people that have a golden opportunity to take advantage in this digital age of ours to create this content," he said. "There's little hope that all of a sudden, a business like show is going to start doing the right thing by underserved markets."