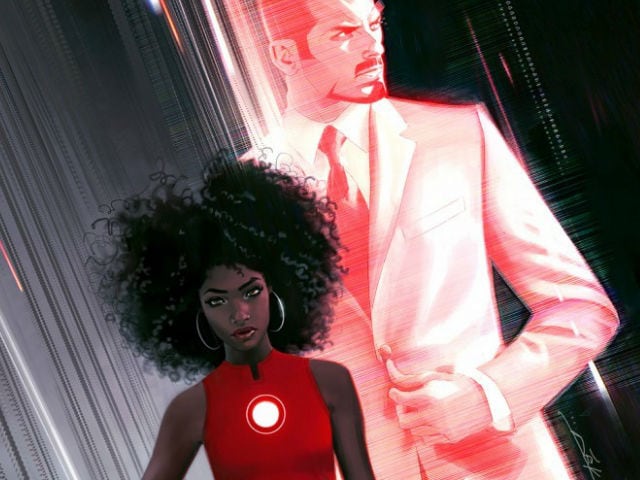 Marvel at some point is going to have to realize that these announcements of diversity can only be halfway celebrated if the diversity isn't behind the pages as well and not just in the panels. Fans should be excited about Riri. Can't wait to see her in action. Even if we know Tony Stark will inevitably come back to his armor at some point

Iron Man will soon be a young, black, female teen.
Where do we begin?
At first glance, this announcement, first made by Time, is another step forward in Marvel Comics' continued efforts to make its comic-book universe better resemble the world it occupies. For so long that wasn't the case. But we now have Miles Morales as a half African-American/half Puerto Rican Spider-Man. We've got Kamala Khan, the new Muslim Ms. Marvel. Thor is a woman. The Incredible Hulk is Asian. Nova has a Latina mother. The Marvel Comics universe is almost unrecognizable when you compare it to just a decade ago.
And now, we have Riri Williams, a beautiful, young black girl with a genius-level IQ who has a mind sophisticated enough to take over for Iron Man when the final events of Marvel's Civil War II unfold, we assume. Even better, the person that is bringing us Riri, writer Brian Michael Bendis, is the same creator who gave us Miles Morales. Everyone loves Miles (this writer included), so everything is just great in the march towards superhero diversity, right?
Not exactly.
While many on social media were quick to celebrate this news, there is a section of the internet, Black Twitter specifically, that isn't really sure how to react. The announcement hasn't been met with 100 percent good vibes, that's for sure.
That's because as Marvel's comic-book pages start splashing more color on the skin of their heroes, the creative minds behind the process continue to be not as diverse.
Brian Michael Bendis is white; he is not a black woman. There are those out there, myself included to a degree, who feel if you're going to bring in a new young, black character and put a famous superhero mantle on her shoulders, the least you could do is give her an authentic black, female voice.
On the other hand, Bendis is one of the most powerful voices in the entire comic-book industry. And he has used the power behind his voice and written words to diversify a comic-book universe that might not be as inclusive as it feels now without his efforts.
Instead of a moral victory, Riri Williams feels like a productive draw. A point for each side, but nobody wins.
Few excel at superhero dialogue like Bendis. He's probably the one writer who can get away with his heroes being extra chatty and not having to POW and BAM their way through an issue. I am looking forward to what Bendis can do with Riri, just as eagerly as I await a new comic-book about Miles Morales each month.
But just as I reluctantly admit that Morales, in his historic run as Spider-Man, hasn't done anything outlandishly Puerto Rican (no dominoes, no wondering why that last Menudo group never came out with a full album, no eating abuela's arroz y habichuelas, no mention of the debt crisis) or black (no debating being a superhero of color - one who has his skin color covered up, granted - in the Black Lives Matter era), I have to assume that same feeling of a lack of authentic voice will come over me when I read Riri.
Bendis' heart is in the right place. And for those who don't know, he is proudly the father of black children, and he'd have an invested interest in making sure the company he works for reflects his diverse family.
Marvel at some point is going to have to realize that these announcements of diversity can only be halfway celebrated if the diversity isn't behind the pages as well and not just in the panels. Somewhere there is a half African-American/Half Puerto Rican kid that would love to write Morales (heck, there's a half African American/half Puerto Rican guy writing this story - they're not hard to find, especially in New York).
If Marvel can get Ta-Nehisi Coates to write Black Panther and an all-Asian creative team on Totally Awesome Hulk, then somewhere there is a black, female voice ready to give Riri Williams new life, whether it be as Iron Man, or whatever identity she may hold in the future.
Fans should be excited about Riri. I am. I can't wait to see her in action. Even if we know Tony Stark will inevitably come back to his armor at some point. But many comic-book fans of color are still waiting to see if moments like this will help produce more diverse creative minds giving voice to these new heroes.
© 2016, The Washington Post
(Except for the headline, this story has not been edited by NDTV staff and is published from a syndicated feed.)