Mr Chan accepted his award, calling it a 'dream,' and shared his memories growing up and watching the Oscars with his parents 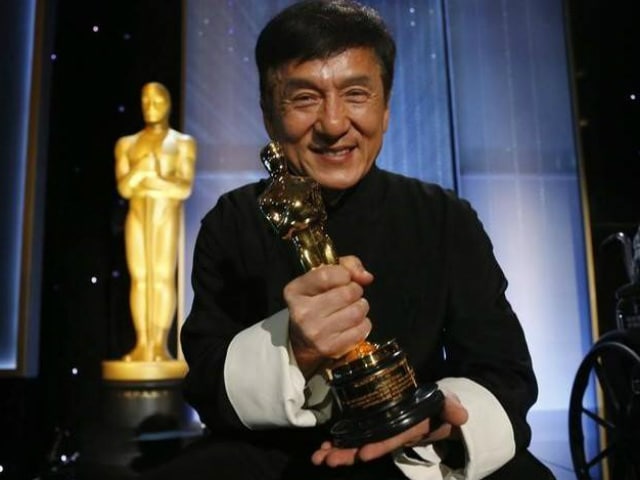 Over 200 films and 56 years later, actor Jackie Chan has finally received an Oscar.
The 62-year-old action star was awarded an honorary Oscar at the Eighth Annual Governors Awards at the Hollywood and Highland Center in Los Angeles on Saturday night, reported E! online.
Tom Hanks, Michelle Yeoh and Chris Tucker presented Mr Chan with the award. Chris Tucker is Mr Chan's partner from the hit Rush Hour movies.
Tom Hanks compared Jackie Chan to the likes of John Wayne and Buster Keaton.
Mr Chan accepted his award, calling it a 'dream,' and shared his memories growing up and watching the Oscars with his parents.
"My dad always said, 'Son, you get so many movie awards in the world, when are you going to get one of these?' Then I just look at my dad. 'Ha, ha, ha. Dad, I only make comedy action movies,'" he shared.
Jackie Chan star remembered seeing Sylvester Stallone's Oscar (Rocky won Best Picture) when he had a meeting with him at his house 23 years ago.
"I touched it, kissed it, smelled it," Mr Chan kidded. "I believe it still has my fingerprints on it. Then I talked to myself, 'I really want one.' Finally, (Academy President Cheryl Boone Isaacs) called and I said, 'Are you sure?'"
The Shanghai Knights/Noon actor thanked his fans and promised to keep working and making movies.
"After 56 years in the film industry, making over 200 films, I've broken so many bones, finally this is mine. I want to thank you, Hong Kong, such an incredible city, my hometown, my hood. China, my country, I am proud to be Chinese. Thank you, Hollywood, for all of those years teaching me so many things and also making me a little bit famous. I'm just honoured to be here," he said.
On Twitter, Jackie Chan shared his feelings about the night.


So honored and happy and lost for words! https://t.co/5EygQcjM35

Jackie Chan, who is a native of Hong Kong, shot to fame in a series of martial arts and action moves made in Chinese. He began as a child star at the age of five and at 17, worked stunts in the Bruce Lee films Enter The Dragon and Fist Of Fury. After making it as a major star in China, he was cast in Hollywood hits like Rumble In The Bronx, the Rush Hour series, The Tuxedo and The Karate Kid. He made Shanghai Noon and Shanghai Knights with Owen Wilson and voices Monkey in the Kung Fu Panda films.