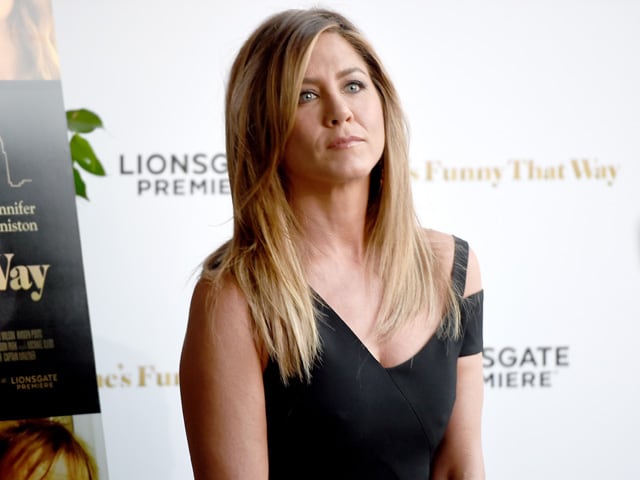 If it sounds ridiculous, well, welcome to life as Jennifer Aniston, also the star of "poor Jen" narratives since she split from Brad Pitt in 2005 and got married last year to Justin Theroux. Anyway, on Tuesday, the actress (not one to directly address gossip) finally snapped after years of enduring these kinds of stories

Like clockwork every few months or so, a tabloid will proclaim the news: Jennifer Aniston is pregnant!
Even when the "news" is proven wrong, over and over, the stories never stop. Last month, In Touch blared a world exclusive "Jen's finally PREGNANT!" on its cover, with a helpful arrow pointing to the bikini-clad actress's abdomen and claiming it was a "miracle baby" for the 47-year-old actress. Her rep eventually released a statement denying the report: "What you see is her having just enjoyed a delicious big lunch and her feeling safe on private property."
If it sounds ridiculous, well, welcome to life as Jennifer Aniston, also the star of "poor Jen" narratives since she split from Brad Pitt in 2005 and got married last year to Justin Theroux. Anyway, on Tuesday, the actress (not one to directly address gossip) finally snapped after years of enduring these kinds of stories. In a piece for the Huffington Post , Aniston rips into the tabloids for spending endless time and money obsessing over her womb, and body-shaming her in the process: "For the record, I am not pregnant. What I am is fed up," she begins.
"This past month in particular has illuminated for me how much we define a woman's value based on her marital and maternal status," Aniston writes. "The sheer amount of resources being spent right now by press trying to simply uncover whether or not I am pregnant (for the bajillionth time. . . but who's counting) points to the perpetuation of this notion that women are somehow incomplete, unsuccessful, or unhappy if they're not married with children."
"I have grown tired of being part of this narrative," she continues. "Yes, I may become a mother some day, and since I'm laying it all out there, if I ever do, I will be the first to let you know. But I'm not in pursuit of motherhood because I feel incomplete in some way, as our celebrity news culture would lead us all to believe. I resent being made to feel 'less than' because my body is changing and/or I had a burger for lunch and was photographed from a weird angle and therefore deemed one of two things: 'pregnant' or 'fat.' "
Read the full post here, as Aniston talks about the "painful awkwardness" that occurs when she's congratulated on her fake pregnancy every single day. She recognizes that the tabloid methods are unlikely to change ( OK! Magazine posted photos of her "tiny baby bump" just a few months before In Touch), but urges people to think about the dangerous message about the culture's obsession with looks and motherhood.
"We are complete with or without a mate, with or without a child. We get to decide for ourselves what is beautiful when it comes to our bodies," Aniston writes. "That decision is ours and ours alone. Let's make that decision for ourselves and for the young women in this world who look to us as examples."
(c) 2016, The Washington Post
(Except for the headline, this story has not been edited by NDTV staff and is published from a syndicated feed.)